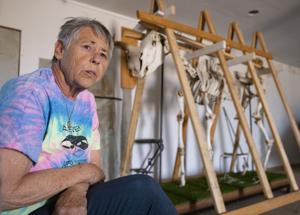 HOOPER • Judy Messoline steps into the garage and frowns at the horse skeleton.

Snippy is long gone, dead 55 years now, the victim of something or someone. The tragedy remains a debate — though, not so much here in the San Luis Valley. Here in this sparsely populated valley of big, starry skies, there is a close consensus on just what happened at that gruesome scene pictured in publications worldwide in 1967.

Ask around, and it seems everybody here has some UFO story. This one about Snippy is the most famous of them all, a local legend that has captivated people far beyond southern Colorado.

It’s only fitting that the Appaloosa’s bones now find themselves here at the UFO Watchtower, Messoline’s roadside attraction.

For the first time in decades, Snippy will return to display. This summer, the plan is for her to move into a building Messoline specially built, attached to the viewing dome people have come to know along Colorado 17, the so-called “Cosmic Highway.”

Of everything that’s been added to the UFO Watchtower over 22 years — the campground, the mystical garden, the sightings recorded in the pages of a binder — “Snippy is most exciting,” Messoline says. She’s either joking or serious when she adds the skeleton was also the most expensive (she declines to say the price, but at one point, the remains were listed on eBay for $50,000).

The price explains why Messoline expects to bump up the watchtower’s $2 cost of admission. She expects to sell new T-shirts, too.

“The world-famous Snippy the horse,” Messoline is thinking of printing on them. “Google it!”

Google it — but be forewarned, you’ll come across those gruesome images.

Or see the skeleton for yourself. See the hole atop the skull that Messoline points out.

“You can see where they cut the skull out to get to the brain,” she says. “There was no brain.”

There was, reportedly, several organs missing. Some said it was as if they had been suctioned away, as if they had melted, vanished like the flesh above the shoulders. In a meadow near King Ranch, the family proprietors found most of the body intact — except for the head down to the collar. From the nose down through the neck, the meat and hide were gone, the bones picked clean.

The 3-year-old mare’s name wasn’t actually Snippy. It was Lady. Snippy was the catchy name given to her by a local reporter, whose dispatch was picked up by wire services around the globe.

According to the story that circulated, the young mare did not return to the stable one day, “and her owner is blaming a flying saucer — or at least a radioactive surgeon.”

“It was a blustery morning, September 8, 1967,” starts another account, from Christopher O’Brien in his book, “Stalking the Herd.”

It’s one book to come out of his years of extraterrestrial research in the San Luis Valley, where he lived from 1989 to 2002. O’Brien has gone on to collaborate on far-reaching films and monitoring equipment.

Snippy, he says, was the case that inspired this lifelong interest. As a boy in 1967 at a grocery store in Bellevue, Wash., he remembers the headline on the tabloids at checkout: “Flying saucers killed my horse!”

O’Brien remembers begging his mom for a quarter or two. “I just devoured the article before I got home,” he says.

Fifty-five years later, he’s not so sure about alien killers. When it comes to “mutilation cases,” as they’re known in his field, “I consider myself an objective, dispassionate observer,” he says. He notes a long list of possible explanations for the dismembered livestock ranchers tend to find.

But as for Snippy, “it’s like Roswell or Kenneth Arnold,” O’Brien says, naming other high-profile cases you can also Google. “It’s the granddaddy or grandmommy of all mutilation cases. It’s considered the first mutilation in terms of being publicized internationally. And it was unlike any case that’s been reported since. It was one of those slam dunk cases, I think, that really exposed how impossible it was to discount the strangeness of it all.”

It was discounted, however, by University of Colorado at Boulder researchers commissioned by the Air Force.

The Condon report concluded: “There was no evidence to support the assertion that the horse’s death was associated in any way with abnormal causes.” There was, according to the report, evidence of infection that likely killed the horse, and of a cut that could’ve allowed magpies and scavengers entry to the innards.

But the family at King Ranch was unconvinced.

In 1993, O’Brien interviewed the late Berle Lewis, husband of the late owner of Snippy/Lady. Lewis questioned how the corpse could appear like that — no blood around, he and the family claimed, no residue on the bones, “bleach white” — in just the span of a day, since the horse was said to have gone missing. Word also spread of the bones turning pink. Some said a “sick-sweet smell like medicine” clung in the air, and others observed large, round, “scorch marks” in the ground.

O’Brien quoted Lewis: “I know it was something we, I don’t know about, killed the horse. I figured after all these years I’d have the answers to it, but I don’t have any answers.”

A local veterinarian suggested some. Upon discovering two bullet holes in the bones, Dr. Wallace Leary posed a theory in The Pueblo Chieftain in 1968:

“… and I’m saying it’s just a theory, is that a couple of kids hit (her) with a couple of .22 slugs. Then, the horse is scared and takes off at a high lope and runs through a fence. I’ve seen it before, that wire can clean an animal like a knife slicing cheese.”

Leary was quoted at a time he acquired the skeleton for display at his office: “I thought we might as well keep (her) around here, because (she’s) given us more publicity than we could ever pay for,” he said.

The publicity continues at UFO Watchtower.

O’Brien couldn’t help but chuckle at news of Messoline’s purchase. “It’s the story that keeps on giving,” O’Brien says.

It’s a story Jay Young has heard throughout his life in the San Luis Valley. He runs the local alligator park, the fellow roadside attraction operator whom Messoline tapped to work on Snippy for display.

Young counted himself “excited” and “honored.” And also a bit spooked.

“I’m always, you know, wondering what if Snippy could talk,” he says.

Then again, she thinks, maybe better to keep it all a mystery. Better to keep Snippy’s odd tale in the press.

“Leave it to the press,” Messoline remarks, thanking us as we leave Snippy’s garage.

It’s a blustery day. Which reminds Messoline of another mystery as she locks the garage door.

“Crazy,” she says. “There’s days I know it’s locked, and it’s like the wind has blown it open.”