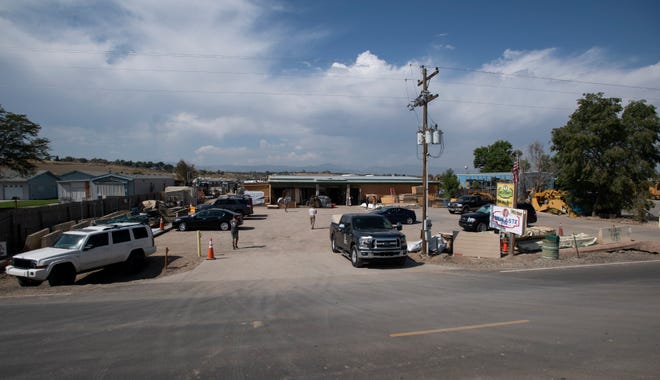 As the original deadline loomed, a Larimer County business was granted a brief extension Tuesday to come into compliance after being found in violation of more than a dozen county codes.

Larimer County commissioners granted Uncle Benny’s Building Supplies, 1815 S. County Road 13C, a six-month extension from Tuesday — until May 8, 2022 — to remove multiple illegal structures and get the property into compliance with floodplain regulations.

Little had been done to remedy the violations in the last year as the initial deadline to come in to compliance by Dec. 31 loomed, county code compliance supervisor Amy White told commissioners during Monday’s land use hearing.

The county first found Uncle Benny’s out of compliance with several county codes after receiving a complaint in August 2019. Since it opened in the mid-1990s, it has been operating without the required permits and approvals from the Larimer County Planning District, according to county documents.

The business is owned and operated by former county commissioner candidate Ben Aste and his family. Aste lost the election in 2020 to commissioner Jody Shadduck-McNally.

After meeting with the county, a consulting firm hired by Aste proposed a phased plan to get the business in compliance with county requirements. A deadline of Dec. 31, 2021, was set by the county in August 2020, according to county documents.

The phased plan required Aste to remove an illegal addition on the main building, remove storage sheds and containers along with the inventory they held, and submit a plan to come into compliance with floodplain regulations.

An illegal two-story addition on the main building has been demolished and a few smaller illegally built storage sheds on the property have been removed, along with the inventory. But White said county officials later observed more inventory stored at the front of the building.

“We were under the impression we could continue to function,” Aste said in response to the inventory being delivered.

There are still upwards of 20 structures and cargo containers on the property that need to be removed, according to county documents.

Aste told commissioners Monday that a new FEMA study no longer designates the property as in a floodplain so he thought those code violations were “moot.” Devin Traff from the county engineering department said the county follows the most restrictive regulations and the FEMA designation won’t change until 2023, so properties still have to be in compliance with current regulations.

Aste apologized to commissioners for not keeping the county informed on their progress and said they’ve been working diligently to get the property into compliance and move to a new site. Several “extenuating circumstances” arose during the last year — including the COVID-19 pandemic impacting their business and issues with another potential property they attempted to purchase — that has hindered their progress, he said.

County news: What’s being done to stop drug use in the Larimer County Jail?

“We didn’t know what was ahead of us,” Aste said. “We didn’t have a crystal ball.”

A complaint from a neighbor of the south Loveland property in early October triggered a county official to do a site visit, where he saw new inventory had been delivered contrary to the site plan, according to county documents.

White told commissioners she sent an email to Aste and his family Oct. 8 that reminded them of the Dec. 31 deadline and that retail use must stop. Aste asked to push the deadline until Dec. 31, 2022, citing progress he’s made on moving to a new location in Johnstown and needing more time to get the current site into compliance.

None of the commissioners supported a full-year extension. Commissioner Kristin Stephens said it was a “fairness issue” after county staff said they often hear from other businesses cited for code compliance issues asking why Uncle Benny’s isn’t in compliance.

Stephens said she was concerned about the safety of the public using buildings that haven’t been inspected.

“I want to get this property cleaned up,” commissioner John Kefalas said. “I want to address the life and safety issues.”

Stephens and Kefalas both agreed to a shorter extension, while Shadduck-McNally said she was a “reluctant” supporter because it seemed unfair to give Uncle Benny’s more time to fix these issues when other businesses aren’t granted this amount of time.

“I’m reluctant to be supportive of an extension due to all the things the county has done to help them,” Shadduck-McNally said.

The current site of Uncle Benny’s is under contract to sell, with a closing date in December 2021, according to the county.

Aste previously told the Coloradoan that Uncle Benny’s had outgrown its south Loveland site and had been looking for a new location. He told commissioners Monday that Johnstown was working with him to “fast-track” the process, but he did not say when they would be able to start construction on a new building.

“We want to get out of there and into our new place,” Aste told commissioners.

Aste did not respond to a request for comment by the Coloradoan’s print deadline Tuesday.

The potential buyers for the south Loveland site own a neighboring property and had been in talks with Aste to let Uncle Benny’s stay on the property until next fall, former county commissioner Tom Donnelly said in speaking on behalf of the potential buyers.

White said the county has spoken with the potential buyers and they understand they would have to file for the proper permits if they want to operate the property in the same way Uncle Benny’s has been operating.

Larimer County attorney Frank Haug told commissioners that any code compliance issues would transfer to the new owners if the property is sold while the issues are still being fixed.