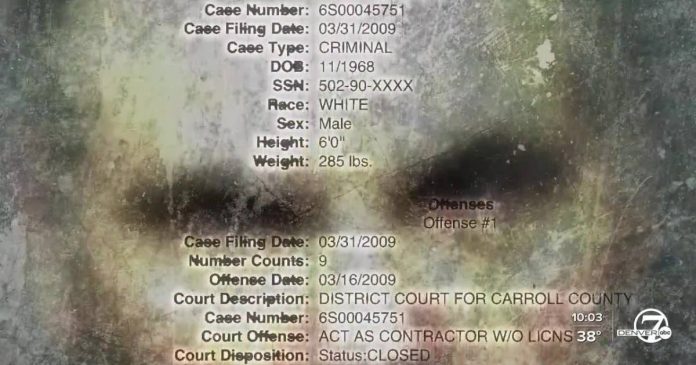 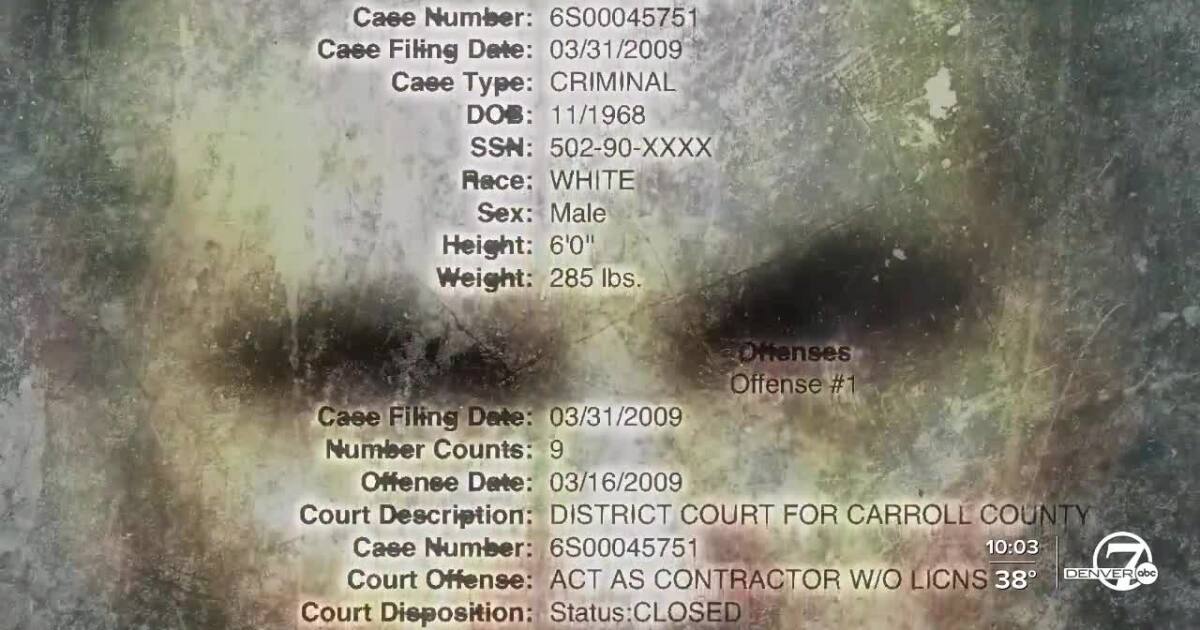 DENVER — An unlicensed contractor with a long criminal history has been making his rounds in Colorado, after being recommended by the popular contractor-matching marketplace Home Advisor.

Mark Lovell’s unsatisfied customers are reaching out to Contact Denver7 to warn others about the contractor, MLC Contracting as well as Home Advisor.

“We felt that we could trust him because we got him off Home Advisor,” said Jay Loeken, who was trying to find a reputable Jefferson County contractor through the popular site this summer.

Not long after hiring MLC Contracting and owner Mark Lovell for his master bathroom remodel, he started seeing red flags.

“We were told this would take six weeks,” said Loeken. “We are on about week 17 or 1`8 right now. He promises a lot of things. We found out that he really doesn’t deliver on them.”

“Yeah, he was cheated,” said Matt Stringer, the owner of First String Heating, who was hired by Loeken to correct the mistakes he said Lovell’s team made. “In fact, a permit wasn’t pulled on this thing, and if it had been, the city would have come in and flagged a whole bunch of this stuff. The duct work is terrible. The air flow is going to be awful here.”

After four months of writing checks and the remodel still not complete, the Loekens fired Lovell.

“We’ve paid him over $33,000,” said Loeken. “Shame on me for not having a contract. I do contracts in my own business all the time. He sent us an invoice and we started work after that.”

Loeken’s online complaints got Paschal Duru’s attention. He also hired Lovell over the summer to remodel his home in Denver.

“It was supposed to be a 60-day remodel and after 60 days we’re not even halfway completed,” said Duru, who said that much of the completed work, such as a the concrete, was shoddy. “The concrete itself, it looks worse than the old concrete.”

“He was recommended to me via Home Advisor,” said Culhane, who said he chose Lovell from that recommendation and because Lovell could finish the project quickly. “He quoted me a 10-day turnaround in the only bathroom in my home, and it’s been three months.”

Not one of the homeowners had a written contract, saying Lovell only offered invoices for his services.

Contact Denver7 did some digging into Mark Anthony Lovell’s background. In addition to an “F” rating with the BBB, court records show that Lovell has criminal convictions related to home improvement fraud all over the state of Maryland, including a bench warrant for his arrest out of Prince George’s County.

He also has a criminal history in Georgia, where one local TV station ran a story on him in 2014, in which homeowners accused him of taking their money, starting jobs and the leaving them high and dry.

In 2014, Lovell would not comment about the pattern of complaint. Now, records show he has moved to Colorado.

Contact Denver7 obtained a police report from Golden police. It states that Lovell was accused in January 2020 by Home Depot Security of repeatedly shoplifting from the Golden Home Depot and Home Depots all over the Denver Metro.

Lovell later plead guilty to theft in connection with that incident.

We repeatedly tried to reach Lovell, but he refused to speak on camera or recorded on the phone.

In a statement texted to Contact Denver7, Lovell said that he has done “thousands of projects”, stating “sometimes we fail” and that he is “committed to resolving issues.”

But according to a Jefferson County spokesman, Lovell is not licensed as a contractor in that county. MLC Contracting and Mark Lovell do not appear in a search for contractors licensed in Denver County either.

Meanwhile, Home Advisor did not respond to questions about vetting pros, instead issuing a statement that Lovell is “no longer part of the network due to poor workmanship and continued issues raised by customers.”

“They have all their legal jargon, they protect themselves, but the consumer is left in the dust,” said Loeken, who said that after Contact7 started asking questions, Home Advisor is working with him to potentially compensate him for some of the money he lost to Lovell.

“Recently, we took a case to trial and secured an eight-year sentence from someone engaging in contracting fraud. We take this seriously,” said Weiser.

To report fraud to the A.G.s office, click here.

In reality, though, Weiser said, there is often little recourse for people who do feel like they are scammed, which is why it is so important to get contracts in writing, research the people you hire and get multiple estimates.

Meanwhile, Loeken said he is contracting the bathroom remodel himself now, and doing the one thing that makes him feel better: Warning others.

“Knowing that I’m probably not going to get any money out of this, the justice in me was like, ‘I need to do something bring this guy down and stop what he’s doing,'” said Loeken.

For more tips on how to protect yourself when hiring a contractor, click here.

Colorado general contractors are licensed at the municipal/city/county level, so you have to check with your local government to find out if they are licensed.