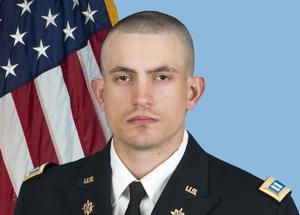 A two-time felon who shot and killed a Fort Carson officer at random in downtown Colorado Springs — then bragged about it afterward — was sentenced Friday to 74 years in prison.

While in hiding after the murder of Army Capt. Daniel Chamberlain Lehman in September 2018, Gilberto Chavez Jr. got a tattoo of a chalk body outline on his back and branded himself “Gilly the Kid” on Facebook, a reference to the notorious outlaw and killer Billy the Kid, prosecutors told the judge.

“I find, Mr. Chavez, that you killed Capt. Lehman for fun,” said 4th Judicial District Chief Judge William Bain. He called Lehman, 28, originally of Santa Fe, N.M., a “wholly innocent victim” shot at random while walking home after a night on the town — targeted by a boastful killer who was high on methamphetamine and heroin.

Testimony at trial suggested that Chavez had decided that night to “take someone out,” for reasons that were never explained, Bain said.

Chavez, 28, was caught through an anonymous tip to CrimeStoppers. He sat silent throughout Friday’s sentencing hearing, declining to address the court and expressing no remorse to the victim’s parents, who sat tearfully in a front row.

“Mr. Chavez took everything from me,” Lehman’s mother, Laurie Chamberlain Lehman, told the court before Chavez’s penalty was imposed. She described her son — a West Point graduate and Army intelligence officer — as a “humble genius” on a promising career path with the service.

“If I believed there was a heaven and I could be with Daniel, I would join him right away,” she added.

Lehman graduated from the U.S. Military Academy at West Point, N.Y., in 2012. He was in the 4th Infantry Division’s 3rd Brigade Combat Team and served in Afghanistan for four months in 2013.

His father, Danny George Lehman, said he survived the loss only by rejecting “bitterness” and anger. He offered his condolences to Chavez’s parents while addressing the court, saying neither family will know what their sons could have become.

An El Paso County jury convicted Chavez of second-degree murder at an October trial, rejecting his attorney’s self-defense argument, but also throwing out the allegation that he acted with premeditation. Although Chavez declined to testify, he told a state psychiatrist that Lehman “came at him” out of nowhere, offering no evidence for the claim.

His body was found on the side of the road in the 400 block of Costilla Street, just east of Wahsatch Avenue. He lived about eight blocks from the tavern.

Police said they walked miles canvassing nearby businesses for surveillance footage of the killing, without success, and that the case was at risk of going cold until the tip came in.

During the trial, prosecutors Andy Vaughan and Claire Nutter focused on Chavez’s boastful statements as he was being sought in the crime, including his invitation to his girlfriend that she join him on the run, referencing “Bonnie and Clyde” in his message to her.

Because of his two prior felonies, Chavez had faced a mandatory 72 year-sentence — three times the normal maximum penalty for second-degree murder. Bain pinned on an additional two-year sentence for a probation violation stemming from 2017.

“There’s no closure because this case is over,” the judge said.

Referring to Chavez’s parents, Bain said, “Every day, they’re going to live with the fact that you killed their son for no other reason than it would be fun.”