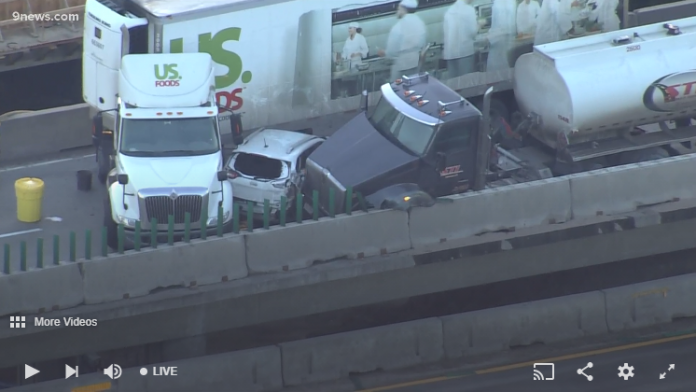 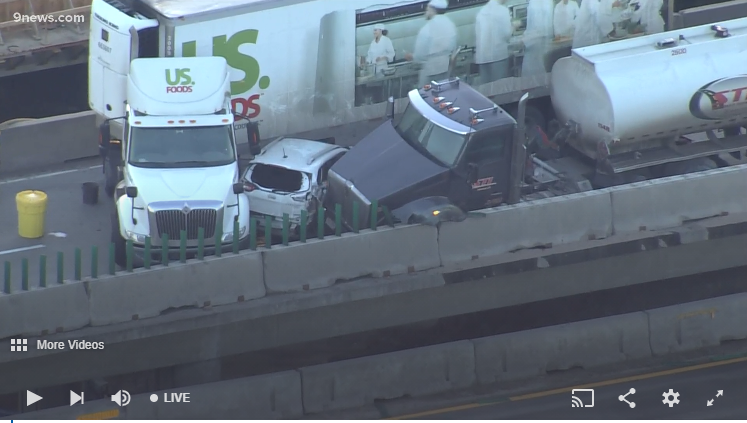 The driver of a vehicle said he was lucky to be alive after his Jeep SUV was pinned between two semi-tractors in a crash early Friday morning that created massive backups on Interstate 25 near Loveland.

The crash happened at 6 a.m. on the Big Thompson River bridge being widened as part of the North I-25 Express Lanes Project.

According to Colorado State Patrol, the SUV driver tried to change lanes when his vehicle struck the back end of a tanker truck, resulting in the SUV spinning, then being pinned between the tanker and another semi, which jackknifed.

Despite the SUV being heavily damaged and the two semis receiving damage, no one was seriously injured.

“It was so terrifying,” said Jesse Quintanilla of Aurora, who was on his way to work in Fort Collins when the crash happened. “As soon as I hit them, all I saw was dust and debris. I climbed out the back window. Everybody was looking at me like I’m a walking ghost. I’m pretty luck to be alive.”

CSP said some fuel leaked from one of the semis. The crash closed the northbound lanes for seven hours and southbound lanes for five hours between Colorado Highway 402 to U.S. Highway 34. Northbound traffic was blocked by the vehicles and damage to concrete barriers as part of the construction project along the interstate.

The southbound lane was closed due to crash and bridge debris littering the lanes.

I-25 speeders: Cops crack down

The Coloradoan relies on the support of subscribers in order to report community news. Please support the Coloradoan with a digital subscription.