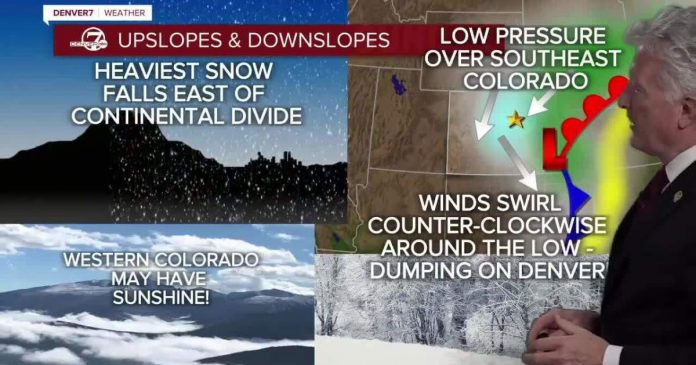 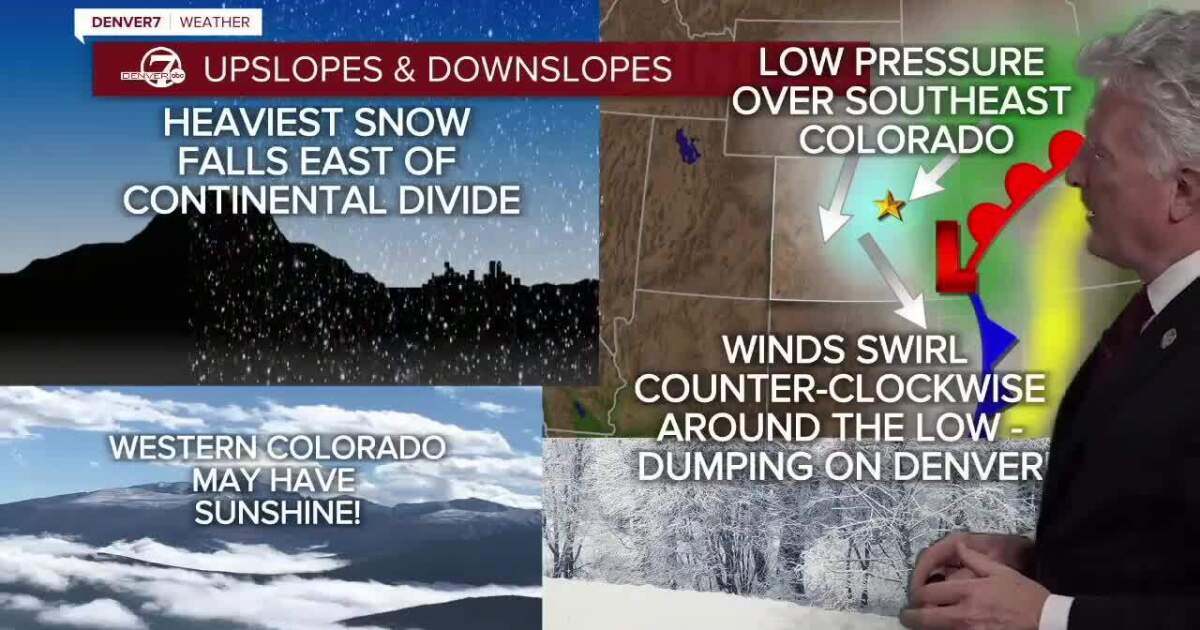 DENVER — As our big, almost-spring storm moves into Colorado, a lot of folks asked about upslopes and downslopes, and what does that mean?

Well, everything in Colorado’s weather is driven by terrain.

When we get a storm system that’s coming in — like this next one — with a strong low pressure system over the southeast corner of Colorado, what happens is around that low, we get the circulation, which comes in as a counter clockwise circulation. That means the winds swirl around the low pressure system, pulling moisture in the Gulf of Mexico and then pushing that around the low into northeast Colorado and bringing some of that heaviest moisture right along the Front Range.

Oftentimes, what happens with a storm like that is the heaviest snows fall along and east of the Continental Divide because that air is forced to rise as it moves up over the higher terrain. It drops its moisture on the other side of the divide — that’s a downsloping wind.

When air goes downslope — think of the Chinook winds that we oftentimes get — the air warms up and dries out a little bit. Very often when we have a system like this, we’ll get the heaviest snows along and east of the Continental Divide, dumping in the Denver and I-25 corridor area.

Sometimes, the skies are actually clear over Western sections of Colorado. A great example is when the Broncos played the Packers in a snowstorm at Mile High Stadium during Monday Night Football in October of 1984.

That was a classic upslope situation.

Even though it was snowing like crazy in Denver, they actually had clear skies in Aspen, Vail and across most of western Colorado.

But the nation saw the dumping snow in Denver and thought Aspen and Vail was getting two or three times that amount of snow. Resorts were inundated the next day, with everybody making reservations to come out and do their early season skiing.

So, it’s all a matter of terrain.

Upslopes and downslopes make a huge difference in the amount of moisture we’re going to see in Colorado with this storm coming in. It should be a classic for us because it’s going to put that storm in southeast Colorado, bringing that upslope around and dropping the heaviest snows along and to the east of the Continental Divide.

We’ve been in a drought, and we need the moisture. Even though the storm may be a hassle, it’s also going to be very helpful.