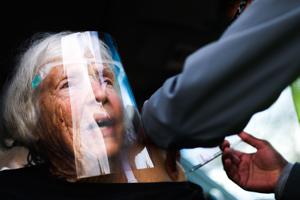 Older white residents in the Denver metro area and Colorado Springs were roughly twice as likely as their Hispanic peers to get vaccinated in the state’s push to inoculate its oldest residents, and activists say state leaders needed to do more to address the inequities affecting minority communities.

The vaccination data highlights the disparity in how the pandemic and the efforts to combat it have disproportionately affected minority Coloradans. State officials have pledged increased focus on those communities, which have been infected and killed by the virus at outsized rates.

Advocates from Latino organizations said Colorado leaders need to do more outreach and provide more resources to ensure historically underserved Coloradans are not left behind by the vaccine’s rollout.

The disparity was roughly consistent across the 10 counties examined by The Gazette. White residents of those counties who fell into the 70-and-older age group were about twice as likely as Hispanic Coloradans of the same age to have been vaccinated. Older Black residents in Denver County were also less than half as likely as white residents to have been vaccinated. Though data is available for other ethnic groups, including Native American and Asian residents, the numbers are generally too small to draw distinct comparisons.

The vaccine data was provided by the state Department of Public Health and Environment, and The Gazette analyzed it using raw population figures for those over 69 years old.

About one in every six vaccination records analyzed came with no race or ethnicity indicated.

The disparities weren’t surprising to Latino advocates, who said that the pandemic — and now the vaccine — is just the latest example of the disproportionate health risks faced by minority communities.

The advocates said there were a number of explanations for the disparity: Vaccine hesitancy, informed, in part, by historic abuse of minority communities by the medical community. Language and technology barriers. Emphasis on larger mass-vaccination events that may not be accessible for all. And access issues within the communities themselves.

“Latinx and people of color have always been at an increased risk in terms of not being able to access health care,” said Hannah Selwyn, the communications chief for the Colorado Organization for Latina Opportunity and Reproductive Rights, or COLOR. “What we’ve seen this past year is nothing new to COLOR, that there is an increased risk of getting sick and dying from COVID-19 (among minority communities). It’s just a pattern we’ve seen before … and quite frankly, we need our government to do something differently.”

The vaccination disparity is most pronounced in Denver. In the city and county proper, white residents account for 64% of Denver’s 70-and-older population. But older white residents have received more than three-quarters of vaccine doses in the city. Their Hispanic peers, meanwhile, compose about 20% of the county’s older population and received roughly 10% of doses.

Because the population of Black Coloradans in various counties is typically low, it’s difficult to draw comparisons. But Black Denverites make up a relatively large share of the city and county’s population — 11.4% percent, according to state demographic data. Older Black residents have received roughly half the share of vaccines that their size would dictate.

The Gazette found Jefferson, Douglas, Arapahoe and Adams counties had similar rates of disparity between white and Hispanic residents.

The slight outlier is Arapahoe County. There is still a disparity there, but it is less pronounced than its neighbors. In that county, white 70-and-older residents account for roughly 81% of the population, and the vaccination rate is slightly below that. Hispanic residents, meanwhile, constitute 6.8% of the population, and they’ve received fewer than 5% of doses thus far.

In El Paso, Weld and Larimer counties, the disparity holds at roughly the same rate as the counties in the Denver metro area.

To address the disparities, the state has designated 15% of the state’s vaccine allocation to clinics in underserved areas and another 15% to community health centers that predominantly serve communities of color, said Conor Cahill, a spokesman for the governor’s office, in an email.

“We want to be sure that in the haste of getting vaccines out, we don’t unintentionally create barriers to access. We hope it is a shared goal to dismantle barriers to access, such as unnecessary identification and patient affiliation requirements,” Cahill wrote.

The state has also set goal of ensuring there are vaccine clinics in 50% of the top 50 census tracts for high density of low-income and minority communities, he said.

Officials are working with community-based organizations to set up vaccination clinics. Events have been held in Center, San Luis, Ignacio, Rifle and throughout the Denver metro area. So far, the state has organized 58 equity clinics throughout the state, Cahill said.

The state expects to work with 9Health, an organization known for its community health fairs, to hold more vaccination clinics, Cahill said.

The state health department has also launched a public information campaign, featuring medical professionals and health advocates talking about the safety and effectiveness of the COVID-19 vaccine. The ads on the web, TV and streaming services like Hulu are running in English and Spanish for about seven weeks, Cahill said.

“We know health disparities exist in our community. While the pandemic has not caused these disparities, it has illuminated them,” Hewitt said in an email.

The group will address barriers such as language and transportation by providing materials and translators in Spanish and other languages and setting up free transportation services. Three vaccine clinics scheduled this weekend in El Paso County hoped to reach about 3,000 people, including many Spanish speakers and minority residents, according to the health department.

The vaccine disparity is caused by two factors, said Emily Cervantes, the policy and research manager for the Colorado Latino Leadership Advocacy and Research Organization, or CLLARO. First is hesitancy among Hispanic, as well as Black, communities, which she said includes wariness informed by historic distrust of the medical community. The state’s expressed interest in vaccine equity conversely increased that distrust, Cervantes said, because it raised concerns that the doses were being tested on minority communities, who in the past have been unwilling subjects in deeply unethical medical experiments.

While much attention has been paid to hesitancy, the second problem is actual access to the vaccine.

Cervantes said the state can also improve access by focusing on community clinics and pharmacies that serve underserved populations.

The largest state vaccine clinics have been held at large facilities like Coors Field and have been drive-thru events. But difficulty in reaching those locations for working class residents present a barrier that is often not made up by the smaller clinics held in minority communities, Cervantes said.

She said that the state needed to lean on “trusted messengers” within minority communities to deliver information and build confidence in the vaccine, rather than relying on top-down encouragement.

“There’s definitely an effort,” she said of outreach to minority groups. “The problem is you have organizations such as CLLARO, we’re considered a trusted messenger, but they’re not offering funds for us to be able to do this type of work. The fact of the matter is it requires manpower and staff and employees to go out and find more people, find more trusted messengers, and just kind of tap into networks and build more networks to get the word out about it. I don’t think it’s enough (support).”

The state should be aware of distinct cultural differences, Cervantes said. Latinos often live in multi-generational homes and are less likely to put their older relatives in long-term care facilities. She said that many Latinos are essential workers and thus present risk to the older family members living under the same roof. Public health officials should give particular attention to those circumstances, she said, and distribute vaccines directly to address them.

Millan and Selwyn, of COLOR, said that language and technology barriers have further inhibited uptake.

“It’s very hard for our communities, especially for Spanish and undocumented communities,” Millan said. “Not everybody has access to email or internet or has a computer or iPad or a smartphone, and this is a first barrier. It’s a big, big barrier. The second barrier is the language because everything is in English, and to find a translation or a Spanish (web)page is very hard.”

Selwyn said that her organization had been contacted by a company contracted with the state to participate in making videos promoting the vaccine within their community. But responses from state government to other Latino-focused groups has been very slow, she said, and the organizations themselves lack the resources to launch their own large campaigns.

Among the Spanish speakers vaccinated at UCHealth was Xiomara Gonzalez, 86, who was interested in getting vaccinated to protect her family. Gonzalez cared for her son earlier this year after he came down with COVID-19, she said through her friend and translator Amparo Rodriguez, who signed her up for the vaccine.

Gonzalez immigrated to the U.S. four years ago to care for her son after he was diagnosed with cancer and she was hopeful that getting vaccinated will allow her to travel back to Venezuela, she said, through Rodriguez.

“The vaccination has been a blessing,” said Rodriguez, of her friend being protected.

Minority community leaders asked for more direct communication with health officials so they could educate their own communities about the vaccinations and set up appointments for community members, she said. The groups also pointed out the need for translators to help reach specific groups such as the Afghan community, she said.

She said that flow of direct communication is starting and she expects Lutheran Family Services to help with translation in the future.

“It’s encouraging me to see the level of collaboration that is occurring,” Hodgkins said.