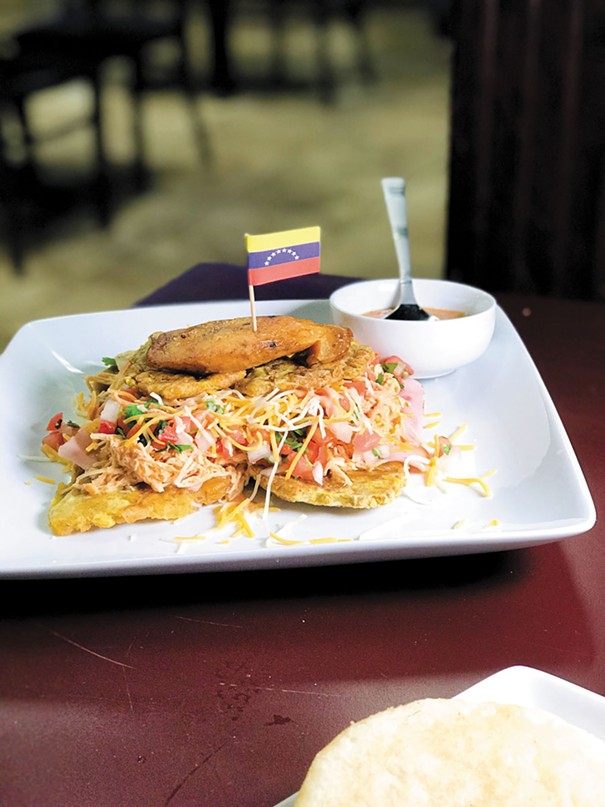 Ivan Torres retired from professional baseball in Mexico and from the L.A. Dodgers’ minor league affiliate at age 25 with a back injury from his years as a catcher. But something better came out of that experience than making it to the major leagues: He met his future wife Maria Silva while playing in Venezuela.

Ivan’s now 35 and Maria 34, and they’re super cute around their restaurant, El Taco y La Arepa, in the former Havana Grill space. They humorously defer to each other when we first ask who’s the boss, and a note in Spanish atop their menu shares how they’ve come together romantically and culturally to fuse the tastes of Mexico and Venezuela here. When Ivan comes out of the kitchen to say hi at our meal’s end, kneeling at our table — fittingly enough in a relaxed catcher’s crouch — he barely finishes a sentence before an adorable toddler jumps on his back (a menu item named after this daughter pays homage to her high energy).

He tells us he prefers the Venezuelan food (her heritage) and Maria prefers Mexican (his), and we’re feeling all warm and gooey at the displays of affection. Though maybe it’s because we’ve just put down a lavish platter of fried ice cream, churros and sopapilla wedges he insists on gifting us after we’ve introduced ourselves and chatted a while about the 20-something restaurants he’s worked at or co-owned between Trinidad, Pueblo and La Junta.

We all know Mexican food well, including items on a seafood section of the menu reflective of Ivan’s hometown Los Mochis in Sinaloa, so we bypass some dope-sounding loaded tortas and the like in favor of Venezuelan items we’re new to. That’s the real exciting part of this visit: a new cuisine in town, to the best of our knowledge. Ivan describes his preferred Venezuelan fare on the whole as more sweet than spicy (not touching that one as far as their relationship goes…).

We don’t find anything cloying, and might choose the word “mild” given no super-sharp seasonings. After a round of oyster shots in peppery tomato juice (these are kinda beach-place Latin America and U.S. everywhere as far as country of origin goes), we launch into a plate of cachitos, doughy croissant-meets-Hot Pocket-like constructs filled with some deli ham slices and melted cheese, commonly eaten for breakfast in Venezuela. Next comes a tamale-like hallaca, a rectangular cornmeal patty steamed moist in a banana-leaf wrap and stuffed with minced pork, beef and chicken (cuz why not the whole farm?) mixed with olives, raisins and capers. For all that, it doesn’t burst with brine, sugar or salt, but manages to fold all influences together into a harmonious evenness. It again speaks to the cuisine’s pleasant mildness that allows ingredients to mostly speak for themselves without spice or sauce dominance.

Cheese plays a notable role on this menu and Ivan mentions a number of different varieties he serves between dishes, including queso duro, hard cheese, a touch briney, which holds up on a grill to be charred without melting; he gives us a sample of this with an interesting sweet corn, mayo and sugar dip. The restaurant’s soft cheeses include one found in tequeños, popular Venezuelan cheese sticks that would make great drunk food, which we dip in a piquant green sauce called guasacaca. Recipes vary online but the sauce’s versatility gets widely lauded; here they blend avocados with cilantro, chicken base, mayo and ketchup for a creamy-tangy effect.

Because we can’t not get an arepa — because the place derives half its name from them and they’re almost always easy and awesome — we pick the queso Telita, filled with another Venezuelan soft cheese that’s not too different from a ricotta cheese. Our arepa arrives slender and crisp compared to some I’ve had, and I like that it’s sturdier than some thicker, easier-crumbling versions. A side salsa picante made with pico de pajaro and jalapeño peppers finally inserts a nice punch of typical Mexican spiciness and it’s great mixed with the guasacaca, which we continue to play with once our entrées arrive.

Pabellón Criollo, Venezuela’s national dish, consists of a Caribbean-common black-beans-and-rice plate paired with fried plantains and shredded beef — this one nicely seasoned with red bell peppers, onions and tomatoes spiked with ketchup and a little sugar and salt, Ivan says. He also adds some avocado slices to his plate, and some versions’ additions call for an egg. It’s simple enough, hearty and pleasing fare, again, great with the sauce enhancements.

We dig the tiny flags that arrive on several dishes, including our patacones, (or tostones), green plantain chips stacked like nachos, layered with pulled chicken (beef or ham optional), tri-color shredded cheese and pico de gallo. Nothing not to enjoy here. So we indulge ourselves, alongside some icy passion fruit drinks. (The menu breaks them into batido de maracuya, a milkshake, and jugo de parchita, juice, using different names for the same fruit.)

We left educated on some Venezuelan staples, happy to have met some new food dishes even if they’re no major stray from nearby countries’ pantries. What Ivan and Maria have done well with El Taco y La Arepa is captured their affection for all to experience through the flavors of their two cultures’ cuisines. Food is love, and they clearly get it.