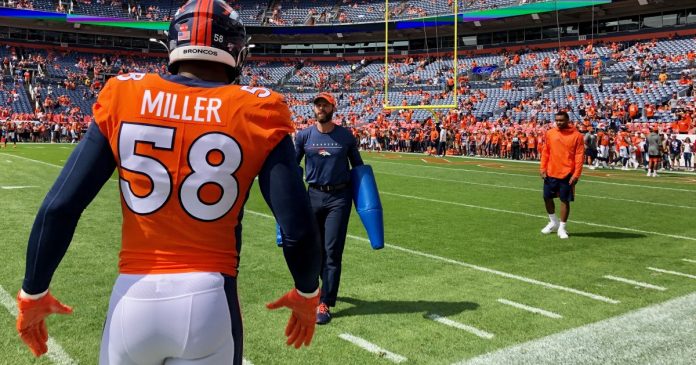 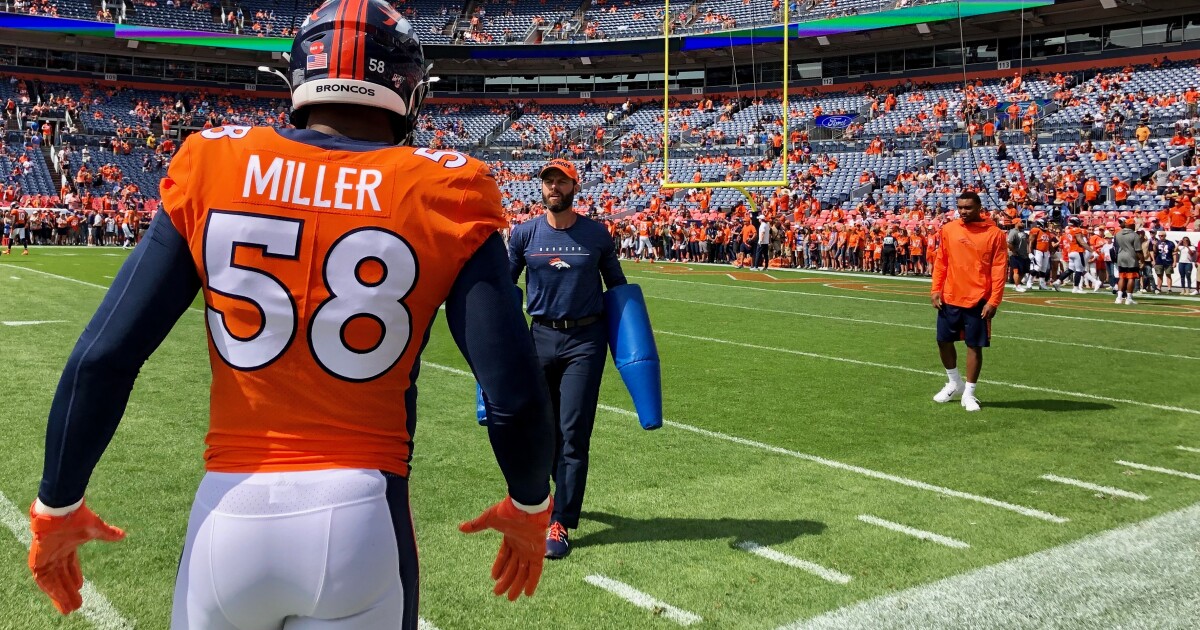 ENGLEWOOD, Colo. — The reality clobbered Von Miller over the head. After a 30-minute pregame workout last Sunday he couldn’t bring his mind to admit what his body was telling him: He needed to sit out. The training staff placed him on the inactive list, ending his streak of consecutive games played at 95. The emotions remained raw on Thursday, and there’s no guarantee Miller will return this week as he deals with a sprained MCL in his left knee, as reported by Denver7 earlier this week.

“It was hard. It was extremely hard. I cried real tears, a 30-year-old man. It was extremely hard,” Miller said when I asked him about missing his first game in six years. ” I thought at the beginning of the week because of the way I have healed over my career I was going to be able to put it out there. The MCL is such an important ligament, and especially with my game. All the exotic movements are really the foundation of my game. And I couldn’t do it. I could have limped around and stayed out of the action, but I would have been a liability. Right now, I am taking it day-by-day. I get better every day, but if I can’t get my exotic movements back, in my opinion, I don’t think I should be out there.”

Miller appeared on the injury report before the Browns game with a sore knee, and was limited in practice all of last week. He told me that the current injury occurred against the Bills in the first half. It prevented him from playing late in the fourth quarter as he struggled to push off and maintain his base.

“I was coming around and getting ready to sack Josh Allen and the right end came around and hit from the side. Usually, I am pretty good with injuries and staying out of piles and all that stuff. That one just found me,” Miller said. “I played with it the rest of the game and it really didn’t bother me. That last four minutes when they running the ball and I stepped wrong and I was out of there.”

The Broncos travel to RNG Stadium this week which features a turf field. Miller tore his left ACL in Houston in 2013. He insisted the playing surface isn’t the issue.

“I don’t think that matters. I just have to focus on getting myself back on the football field. And I am doing everything possible to make that happen,” said Miller, who has six sacks in 11 games, whose absence created more snaps for Malik Reed and Jeremiah Attaochu. “I usually heal quickly. Whatever it is the trainers need me to do, I will do it.”

Footnotes
Right guard Ron Leary remains in the concussion protocol and is not expected to play Sunday. Austin Schlottmann would start in his place. … Offensive coordinator Rich Scangarello said quarterback Drew Lock used the wristbands because it was a good fit for him. Scangarello said he is adapting to Lock’s strengths as the team moves forward with the rookie. … Lock is attempting to become only the third Broncos rookie quarterback to win his first two starts, joining John Elway and Craig Penrose. … Part of the issue with the Broncos offensive struggles relates to youth. When Leary left last week’s game, Garett Bolles, in his third season, was the most experienced player on a unit that has started three quarterbacks this season. … Broncos coach Vic Fangio on if he enjoys the challenge of muting a high-powered offense like Houston’s. “I enjoy chess matches when the other team doesn’t have good chess players.”