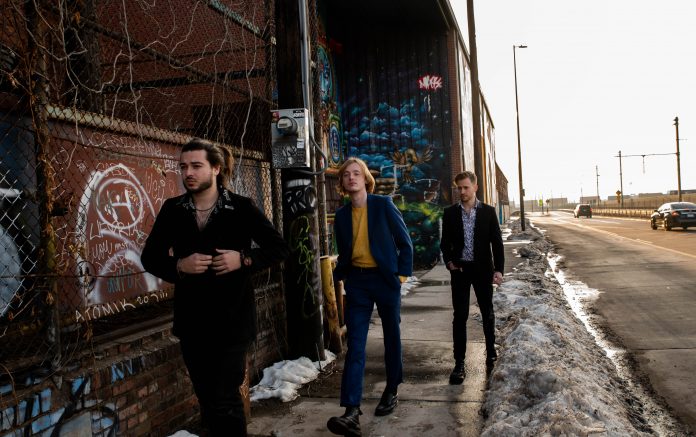 In a world turned upside-down, it’s inevitable that artists would make art to reflect this prolonged period of turmoil and devastation. However, while other artists may have used time in quarantine to create and escape or reminders of the way things were, Denver’s synth-pop group VYNYL decided to face the challenges the pandemic created head-on. As the world begins to open up again, their new EP — The World Is On Fire, and I’m Lonely — serves as an angst-driven time capsule that perfectly captures the year that kept us all apart and changed life as we knew it.

After sharing the stage with 3OH!3, Lil Jon and Breathe Carolina for 303 Day at the Mission Ballroom last March, VYNYL headed off on tour, only to have to cancel a couple of weeks later due to COVID-19. Gutted, the band returned home to isolate, unsure of what was to come, same as the rest of the world. “Being presented with these challenges that we’ve never had to deal with before, this sense of isolation was very much real,” guitarist Hunter Heurich recalled. 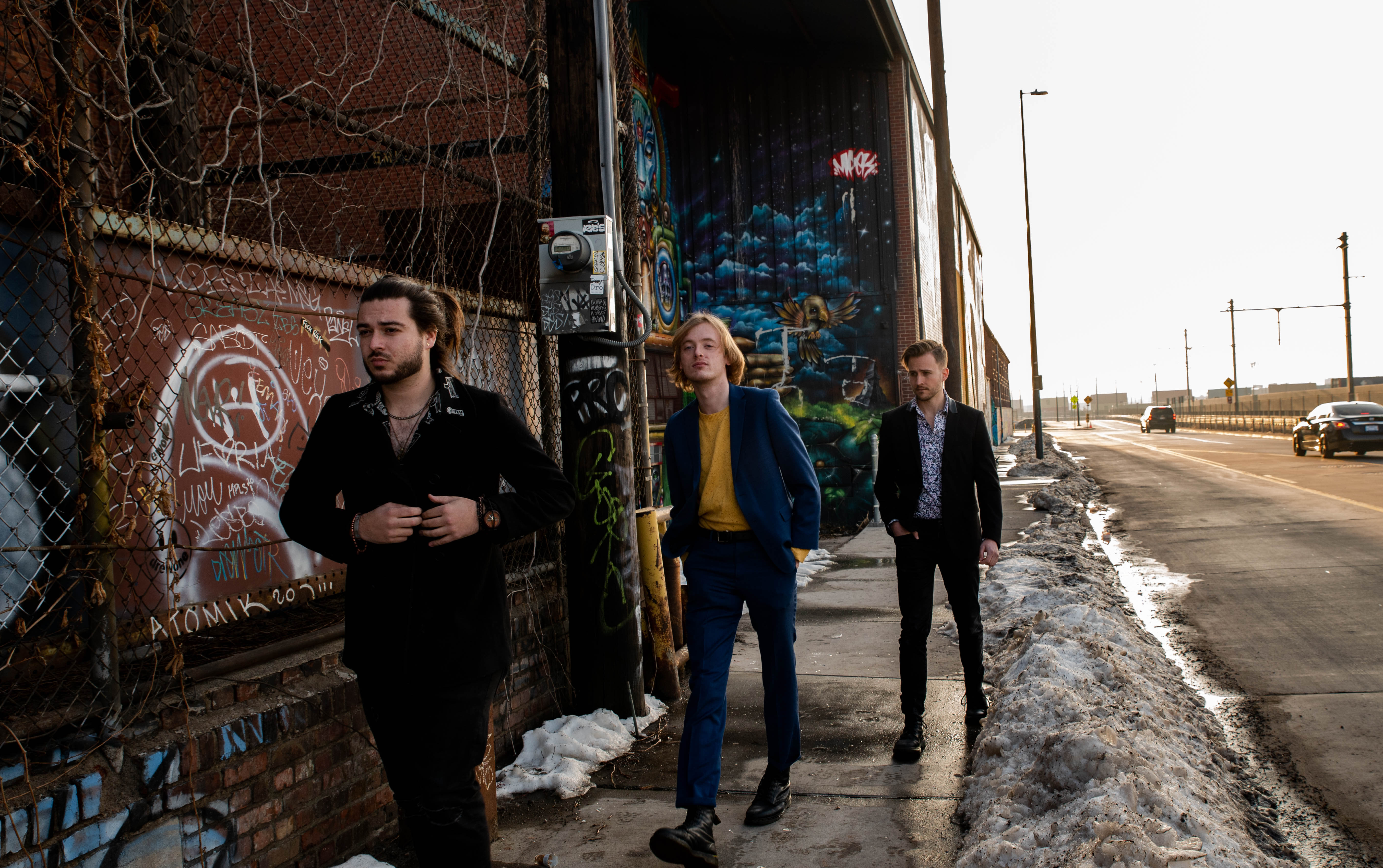 After dealing with the initial shock of watching the world shut down, and a few days of “un-ending gaming” for frontman John Tyler, the band began to shift their plans. Since releasing their debut EP, Pink, in 2019, the band had already been thinking about their next moves. However, with live shows out of the question, their follow-up EP was the logical project to focus on. While VYNYL is a self-described pop band, they decided that continuing to go for a pure pop sound wasn’t appropriate for the time period. Whiteley described the thinking behind the sound of their new EP.

“There was just this sense of, feeling so enclosed in your own skin that you just have to do something drastic to get out of it. To us, what felt most drastic was, let’s make an album that nobody would really see coming from us. If you looked at Pink, and you said, ‘Okay, the next logical step would be X,’ that would be what we probably would have done if the pandemic hadn’t happened. But because the pandemic made us all change our mindset so much, it shifted our focus away from chasing momentum.”

With the exception of “Quite Like You,” the songs on the EP didn’t exist before the pandemic began. The band decided to take a raw, unfiltered approach as they wrote their new music, and the result is a collection of gritty, arena rock-inspired songs that, put together, serves as an authentic, no-holds-barred account of what it’s like to live through global trauma. All three members drew on their musical backgrounds to create this harsher sound. Heurich’s first experience in a band was playing thrash metal, the first concert Whiteley ever played included Metallica covers in a Baptist church, and bassist and lyricist Andrew Cole is a self-described Blink-182 and David Bowie fanatic.

The album opens with “sex/drugs/therapy,” an urgent, anthemic track where the band reflects on their coping mechanisms in the face of adversity. It recalls the pandemic summer of 2020, when instead of spending late nights in crowded bars, meeting new people and being around friends, an “anti-social summer scene” reigned instead. The band also suggests a paradigm shift from sex, drugs and rock n’ roll to a more relatable, new age concept of sex, drugs and therapy instead.

For Tyler, “heart//break” is his most personal song on the EP. After enduring an unhealthy, long-term relationship and the subsequent heartbreak, Whiteley rebuilt his sense of self and detailed the experience through music.

“I was just constantly feeling like my self-esteem, my personality and my own heart weren’t mine to have — I felt like this person had stripped away so much of who I was as a person,” he explained. “The whole point of ‘taking back the heart that somebody stole’ is saying, I’m not gonna let you continue to hold on to my heart rent-free — I’m taking this back. This is mine. This is my life.” 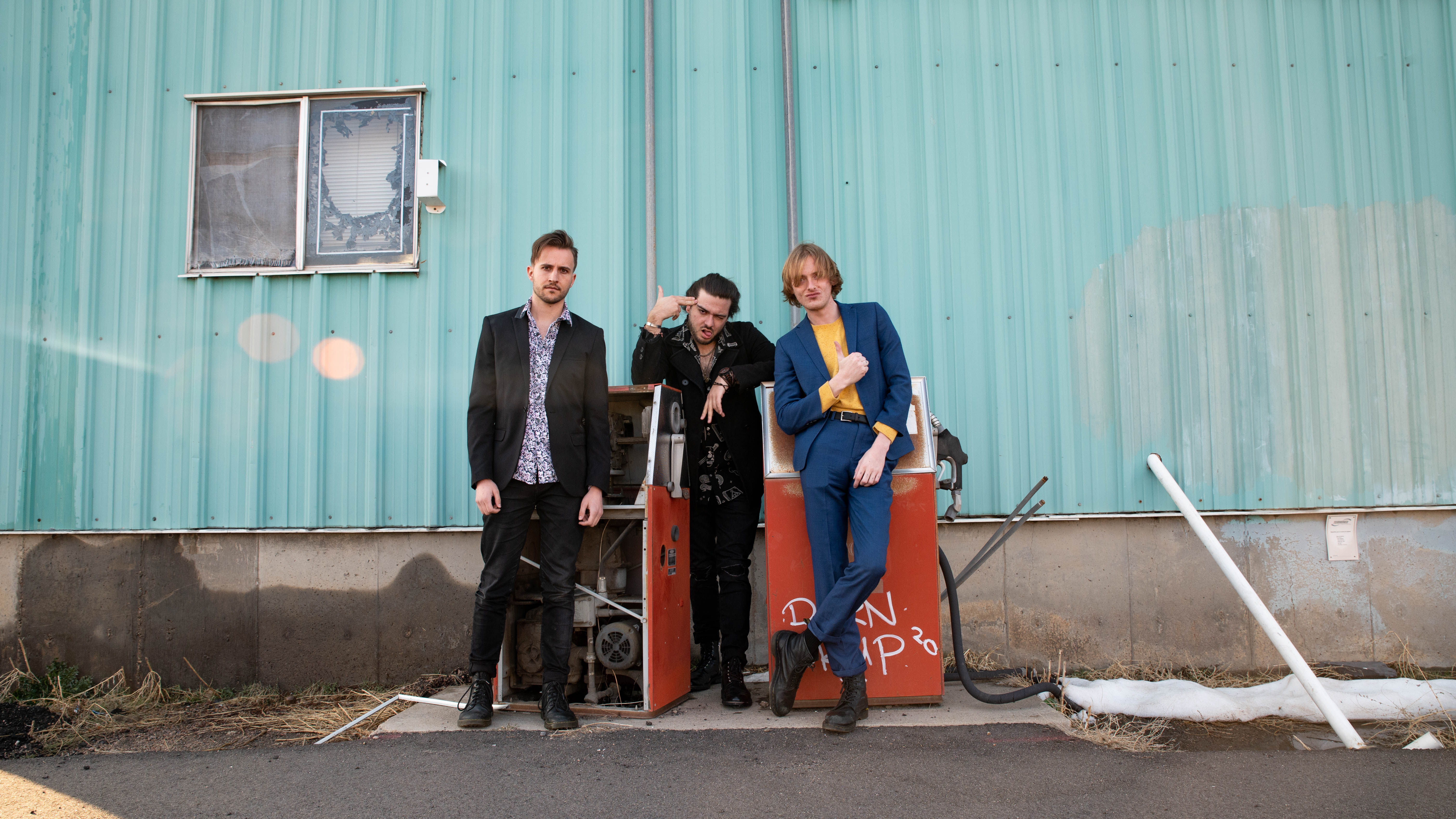 While the process of creating the EP was difficult at times, it was also a welcome challenge that revealed weaknesses and encouraged growth. “Now, I can say that I totally understand why sometimes albums will break up bands because the process of getting it done is so much work,” Tyler explained. More than just work, Heurich described the making of The World Is On Fire, and I’m Lonely as the “saving grace” of the band. “If we didn’t have this body of work to work on, who knows what would’ve happened because we wouldn’t have had any reason to come together,” he said.

VYNYL hopes that fans will be able to resonate with the music they’ve created. “I think this has been a very honest take from us, and I want people to vibe on that,” Heurich explained.

Tyler added, “I want this album to be our message to the world that we’re not just some other pop band that makes pop songs hoping to make a commercial hit. I want to help show people that it’s okay to be fucked up and not know what you’re doing — to be depressed and be not okay with where you’re at. But understand that those emotions are essentially assigned to your body. I heard this really, really interesting thing from Jeff Bezos, but I’m gonna take credit for it. Fuck Jeff Bezos. Stress is an indicator of your body telling you that there’s something that you could be fixing that you’re not addressing. Even if you just accept that and start to look into those issues, you’ll instantly feel better. I hope that through music, we can help people address those issues and not feel afraid to take chances or take risks or be honest and open with themselves or their partners.”

Now that live shows are becoming more of a possibility, VYNYL can’t wait to head out and hit the road once again. There’s no doubt that The World Is On Fire, and I’m Lonely is filled with material primed for a cathartic, face-melting live experience. “Shows are where we do a lot of the work of making fans and connecting,” Tyler said. “Since we can’t do that, right now, we just wanted to give people an album that could make them feel a little bit of a rockin’ live energy, but maybe just dancing around the room.”