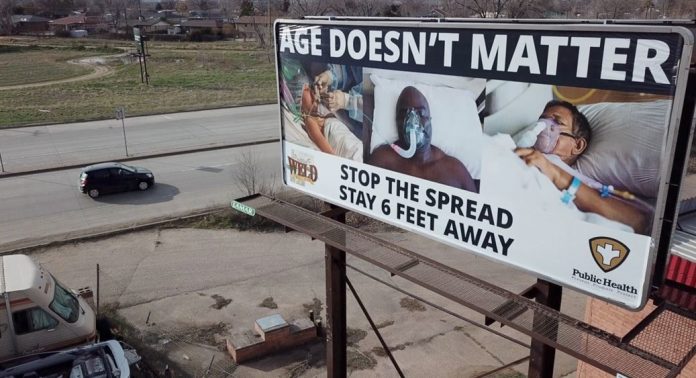 GREELEY, Colo. — More than a dozen billboards in Weld County are warning residents about the dangers of COVID-19. Still, despite a high number of positive cases and deaths connected to the virus, county commissioners are moving forward and letting businesses decide if they want to open for business.

Weld County released guidelines for businesses to reopen Monday, which goes against Governor Jared Polis’ safer-at-home initiative. His phase plan provides a timeline to determine which shops can open and which must wait.

On Monday, a reporter got confirmation from the governor that the safer-at-home plan was a recommendation, not an order.

But on Friday, he backtracked when Polis was asked about Weld County’s move to reopen. He said the guidelines they set were not thorough enough and added that Weld County did not apply to relieve any restrictions. Polis went as far as threatening to pull emergency funds from the county and business licenses.

“As Governor, I’ll take whatever steps necessary to protect the health of the residents of Weld County,” he said.

According to a statement released by the governor’s spokesperson, local governments can relax guidelines more than the state, but to do so, they need to show proof that COVID-19 cases have declined in a two-week period. Counties must also present a plan to the Colorado Department of Public Health and Environment that shows how they plan to suppress COVID-19. The local health department must also approve the plan. The governor plans to formalize a process for counties in the coming days, according to his spokesperson.

“He puts out a confusing message,” Kirkmeyer said. “Where is his guidance? That order expires on Sunday. He’s been talking about this now for the last week.”

She said the board acted by releasing guidelines.

“The responsible thing to do is put out some guidance and help these businesses,” Kirkmeyer said.

Nicholetta Donaldson owns Brickhouse Functional Fitness in Windsor. She says she’s confused about when she can reopen.

Weld County is letting business owners decide if they want to open, but the town of Windsor posted on Facebook, “when the governor’s orders come out, that’s what the town plans to follow.”

“It is absolutely infuriating to feel so confused as a business owner and as someone who is trying to support a community of people who are looking to me for guidance,” Donaldson said.

She worries if she opens too soon, she will be ridiculed by her community. Unsure what to do, Donaldson plans to stay closed but will begin preparations to reopen sometime in May.