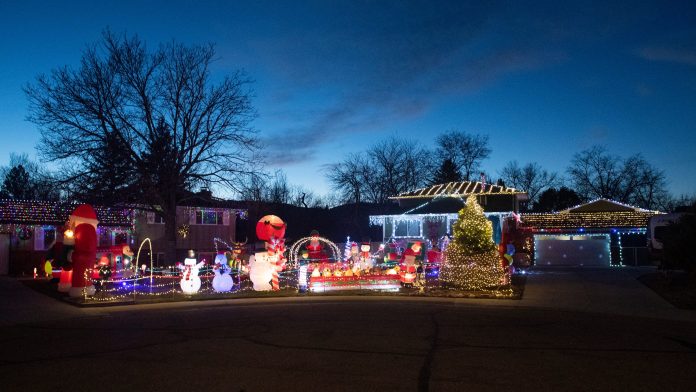 Fort Collins experiencing a white Christmas of at least an inch of snow on the ground was a no-brainer last year given the city received nearly 17 inches of snow around Thanksgiving Day.

This year, it looks to be more like a head-scratcher.

The National Weather Service is forecasting a slight chance of snow this weekend, but the long-term forecast looks very brown.

Becky Bolinger, assistant state climatologist for Colorado, said the National Weather Service Climate Prediction Center is forecasting the next three to four weeks to likely be warmer and drier than average for the Front Range.

“The forecast is stacking the deck away from having a white Christmas this year,” she said.

The city’s last snowfall of significance was 3.6 inches on Nov. 9. The city received 13.2 inches of snow Oct. 25 in a storm that dumped a foot or more of snow on the Cameron Peak Fire, essentially ending its threat of additional growth.

Bolinger said, on average, Fort Collins has a 45% chance of at least an inch of snow on the ground and a 30% chance that snow falls on from 7 p.m. Christmas Eve to 7 p.m. Christmas Day over the last 20 years. Fort Collins’ official weather information is tracked through 24-hour time periods beginning at 7 p.m. daily.

The most snow ever recorded on the ground in Denver on Christmas Day was 24 inches, which came thanks to the Christmas Eve blizzard of 1982.

The heaviest snowfall in Denver on Christmas Day was 7.8 inches, which occurred in 2007 and broke the record of 6.4 inches in 1894.

Hourglass Reservoir, near where the last hot spot of the Cameron Peak Fire is smoldering northwest of the Colorado State University Mountain Campus, has a 99% chance of snow on the ground on average and a 28% chance of snow falling on Christmas Day.

Here are Colorado towns and cities with the best chances of having at least 1 inch of snow on the ground on Christmas Day and each location’s chances of measurable snow falling on Christmas Day, according to NOAA observations 1980-2010:

Gateway on the Western Slope has the least chance of either at 4% and 9%.

Here are other national locations’ chances of having at least 1 inch of snow on the ground on Christmas Day and each location’s chances measurable snow falls on Christmas Day, according to NOAA observations 1981-2010

Colorado’s snowpack is off to a slow start. Only the Upper Rio Grande basin in southern Colorado is reporting above average snowpack at 111% as of Monday. The South Platte basin, which includes Fort Collins to Denver and areas west and east, is at 81%.