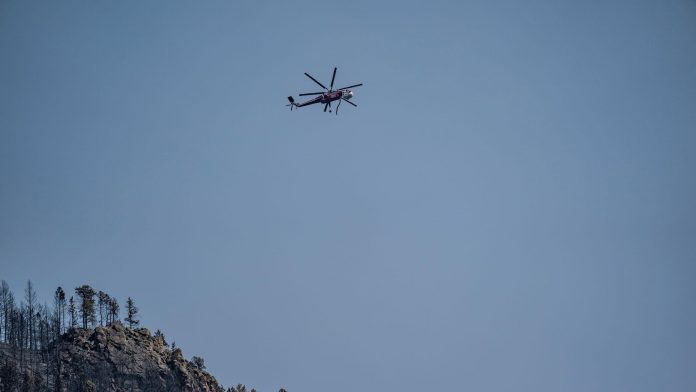 Crews with heavy equipment worked overnight to contain the fire and continue to work on it Monday, John Norton-Jensen, fire planning operations trainee, said during the Monday morning video update.

A red flag warning started Sunday night and remained in effect until 7 p.m. Monday with wind gusts possibly exceeding 50 mph and relative humidity in the teens.

“We were tested heavily last night and will be challenged today as these are the days we will have spot fires,” Norton-Jensen said.

Norton-Jensen said heavy equipment and crews are working the spot fire and will be assisted by helicopters, though high winds could ground aircraft.

Norton-Jensen said the fire burning west of Fort Collins did not break any other containment lines. The north containment line is critical in keeping the fire from moving north and east to the Glacier View and Red Feather Lakes communities.

The red flag conditions are caused by a weather event called a shallow mountain wave. That condition occurs as pressure builds on the west side of the Continental Divide until the pressure becomes too great and the wind rapidly flows over the highest peaks and creates strong winds on the east side of the divide where the fire is located.

Generally, fire behavior decreases as the sun sets and wind and temperature decreases while relative humidity increases. However, due to the mountain wave, the fire remained unusually active Sunday night, which hampered what usually is a favorable time to battle the blaze.

Those winds are coming from the west-southwest pushing the fire, which is within a couple miles of Red Feather Lakes, toward that community and neighboring Crystal Lakes and Glacier View where thousands of homes and outbuildings are located.

Firefighters are also patrolling the east edge of the fire and continue to improve structure protection throughout those communities.

Norton-Jensen said the fire also was active on the southern edge in the Comanche Reservoir area just north of the Colorado State University Mountain campus and that additional resources have been moved there should fire activity increase.

He said to expect heavy smoke Monday from the “green finger” burning between the fire southwest of Red Feather Lakes and north of Colorado Highway 14. That area is a strip of land that did not burn when the fire made previous runs.

Additional smoke will pour from the Mullen Fire that started in southern Wyoming and progressed into northern Colorado. That blaze’s firefighters are facing similar weather conditions as Cameron Peak Fire crews.

Monday will be the most challenging day of this week for firefighters, but warm, dry conditions with low relative humidity is forecast throughout the week.

A system is forecast to move into the area this weekend that could bring some rain to the fire area.

Fine particulate matter concentrations are expected to be in the moderate to unhealthy for sensitive groups range Monday, according to the Colorado Department of Public Health and Environment.

Moderate to heavy smoke has been observed Monday morning across Larimer and Weld counties due to smoke transported from the Cameron Peak Fire and Mullen Fire in south-central Wyoming. The smoke will decrease Monday, but is expected to increase and become heavy during the afternoon for much of the the Front Range, including Fort Collins.

The Cameron Peak had grown to 126,251 acres with 42% containment as of Sunday night. There are 937 people assigned to the fire.

The fires are approximately 25 miles apart.