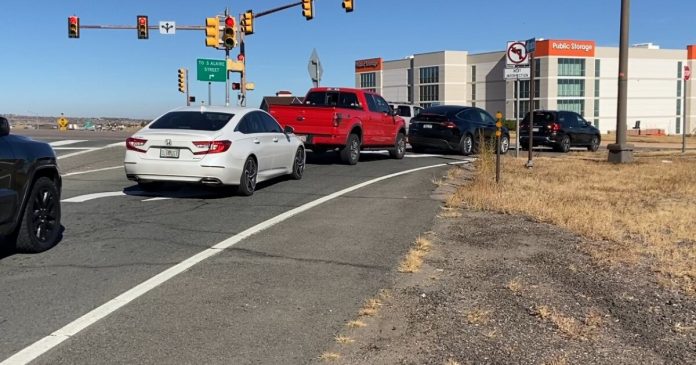 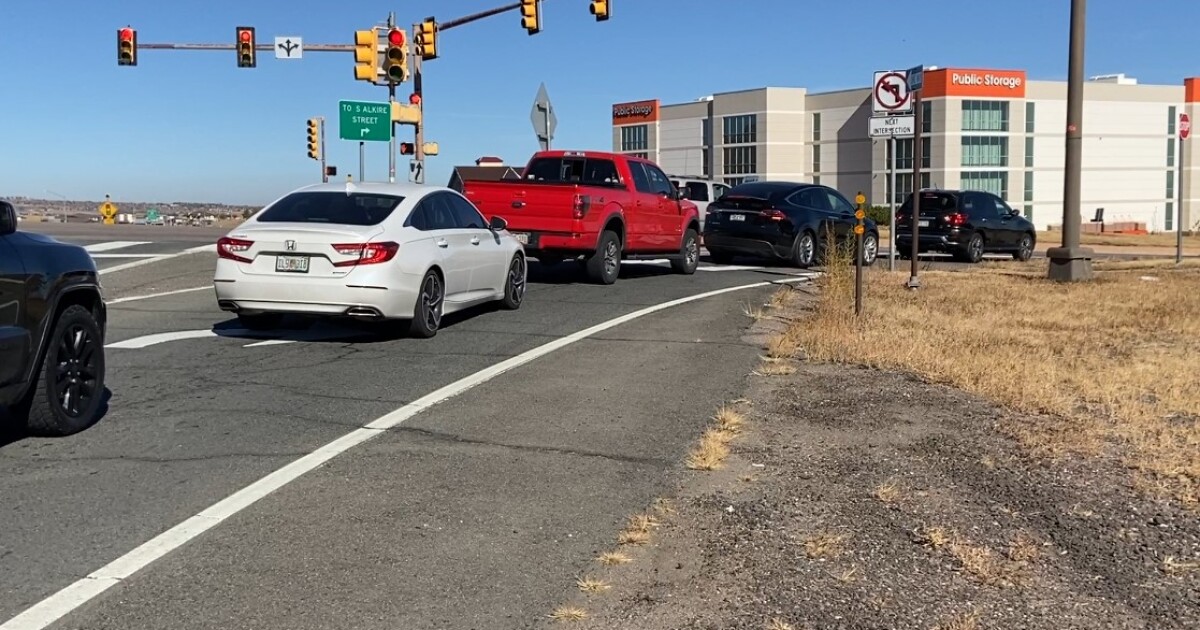 Ginnie from Littleton writes, “What’s driving you crazy? The exit ramp from WB C-470 to Bowles has three lanes. One lane is for left turns or thru traffic. The middle lane is for right turns for drivers planning to turn left at Alkire. The right lane is a continuous lane with access to the Walmart entrance. Drivers do not understand the configuration (although it is well described with signage) and stop in the right lane, waiting for all lanes to clear so they can make the left into Tipsy’s. Why do they STOP?”

I’ve said it before, and I’ll say it again. Usually when you follow the road markings and street signs, they will lead you the right way. But people being people — they usually do what they want to when they get behind the wheel.

That ramp does have three lanes. The farthest left lane is a left turn only lane to go west on Bowles. The middle lane allows for three different movements, left, straight or right. The farthest right lane is a dedicated continuous right turn lane. That means you turn right and keep moving as you transition into the dedicated new right lane traveling eastbound on Bowles. No stopping required.

The one caveat with using the dedicated right turn lane is that drivers are prohibited from crossing all eastbound lanes on Bowles to make that first left into the “next intersection.”

Bob Kiene, CDOT’s Region 1 Traffic Operations Engineer, tells me the next intersection in this case includes both the left turn into the Tipsy’s/Les Schwab/Public Storage shopping center as well as the next real intersection, which is Alkire Street.

“The intent of the restriction is to prevent vehicles turning right from the off-ramp from stopping to wait for gaps in traffic to merge across Bowles in a short distance, resulting in blocking the added lane and delaying a larger number of drivers behind them,” Kiene said. “Drivers wanting to access the shopping center entrance should use the center lane at the off-ramp traffic signal while drivers bound for northbound Alkire Street are encouraged to do the same.”

As Bob says, that prohibited left from the right ramp lane is the reason the center lane on the exit ramp allows for right turns at the light. That is how you are supposed to get to the shopping center, make a right from the center ramp lane after stopping at the light if it is red. Then merge over one lane to go left into the shopping center or go left at Alkire Street.

To your last question Ginnie, I can imagine drivers citing several reasons why they would take the continuous right lane, slow or stop to wait for traffic to clear, make that move across all lanes to make that left. They find it more convenient to use the dedicated right because they can just keep rolling along. They don’t want to make the right from the center ramp lane because they don’t want to stop to make a right or don’t know that is the right way to do it. Or they just don’t care about the prohibited movement sign and drive how they want to. In reality, it is most likely a mix of all three.

In any of the cases, they are doing it wrong and driving you crazy.

Denver7 traffic anchor Jayson Luber says he has been covering Denver-metro traffic since Ben-Hur was driving a chariot. (We believe the actual number is over 25 years.) He’s obsessed with letting viewers know what’s happening on their drive and the best way to avoid the problems that spring up. Follow him on Facebook, Twitter or Instagram or listen to his Driving You Crazy podcast on iTunes , Stitcher , Google Play or Podbean.