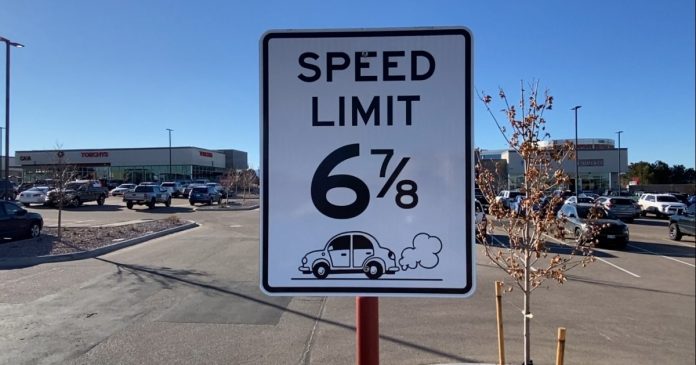 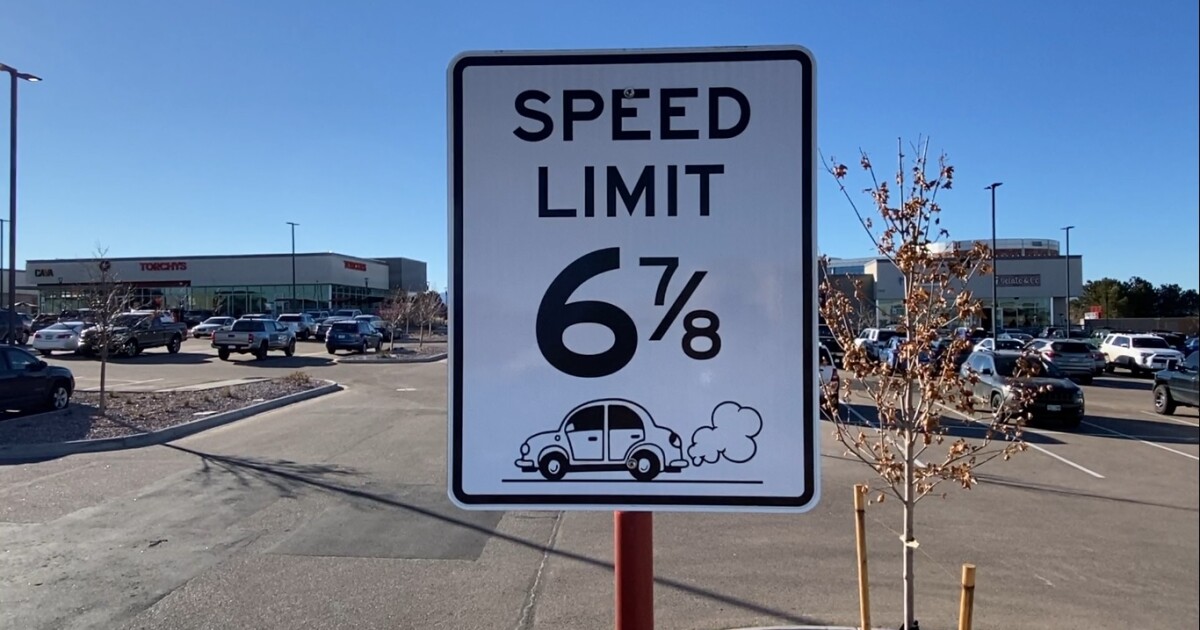 Michele from Highlands Ranch writes, “What’s driving you crazy? Speed limit signs with fractions. Really? There is a sign in the Old Chicago parking lot reading 6 7/8.”

It seems that these types of speed limit signs are becoming more popular across the country.

The story about the 6 7/8 speed limit isn’t as exciting as you or I hoped it would be.

Sean Kidston, senior real estate manager for Shea Properties, tells me they put up those unusual speed limit signs in that Highlands Ranch shopping center just to be a little different. It’s the same story in the nearby Target shopping center, also owned by Shea properties, with both a 17 1/2 and 12 1/2 mph signs.

Shea developers during the planning process for these and other developments, hoped the odd mph signs would be a topic of conversation for anyone who comes to the shopping centers. Sean tells me there is no particular rhyme or reason why any specific speed limit was chosen, it was just done to be different and fun. Since you are asking me about it, mission accomplished, according to the planners.

Sean tells me the fractional speed limits are part of several unique features of the center like the light posts and the phone booths. He says it is a way to make each of the shopping centers unique. I asked if maybe they can make the next sign a math equation. He told me, “Maybe I can talk to the development team to make the next speed limit sign Pi. Either way it will be unique in the next development.”

If you are on a public street, the governing body for that road will consult the Manual on Uniform Traffic Control Devices for Streets and Highways, or MUTCD, to set the speed limit. The MUTCD defines the standards used by road managers nationwide to install and maintain traffic control devices on all public streets, highways, bikeways, and private roads open to public travel. Under the operating speed method of setting speed limits, the first approximation of any speed limit is to set it at the 85th percentile speed. In other words, the speed that 85 out of 100 vehicles are traveling on that roadway. The MUTCD recommends that the speed limit be set on any road within 5 mph of the 85th percentile speed of free-flowing traffic and that the posted speed limit shall be in multiples of 5 mph.

The 85th percentile is a standard guideline, but municipalities are free to stray from the manual. There is one notable exception to the 5 mph rule. The town of Trenton, Tennessee is mostly signed at 31 mph on its major roads. According to Roadside America, in the early 1960s the Mayor and aldermen of Trenton could not agree whether the town speed limit should be 30 or 35 mph. As they were talking they tossed out the tongue-in-cheek compromise of 31 mph. The two agreed and so the odd numbered speed limit was adopted and has stood as the posted speed in the town ever since. According to a news report, if you walk into City Hall you’ll see t-shirts and other items advertising the unusual speed limit signs.

There countless examples around Colorado, and around the country of odd number speed limit signs in private developments or in parking lots. One notable national example is at Ole Miss University. Manning Way, named after the Ole Miss Rebel quarterback Archie Manning, the speed limit used to be 18 mph in honor of Archie’s number. It was changed to 10 mph after Archie’s son Eli won the Superbowl. It also brings the speed limit in line with the uniform standards.

Denver7 traffic anchor Jayson Luber says he has been covering Denver-metro traffic since Ben-Hur was driving a chariot. (We believe the actual number is over 20 years.) He’s obsessed with letting viewers know what’s happening on their drive and the best way to avoid the problems that spring up. Follow him on Facebook, Twitter or Instagram or listen to his Driving You Crazy podcast on iTunes , Stitcher , Google Play or Podbean.