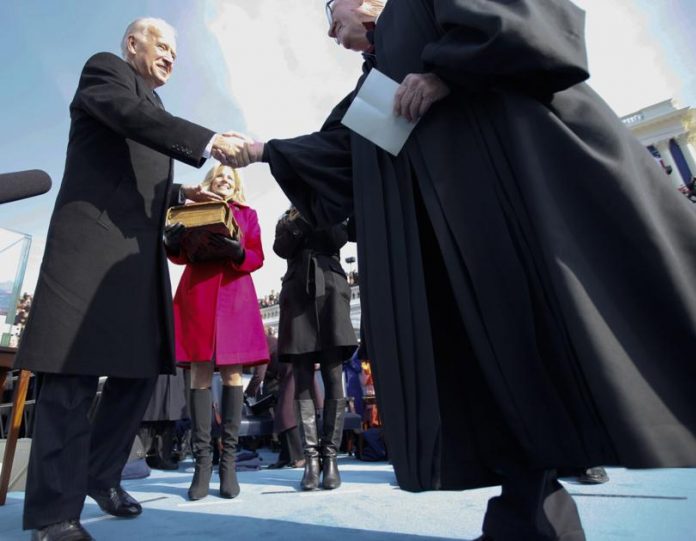 To stream the presidential inauguration live for students, to show it to them on delay or to avoid it all together —for educators in Colorado Springs and around the country — that is Wednesday’s biggest question.

“I would 100% give teachers the green light to watch it live [with their classes] in a different climate,” said Aaron Ford, a principal at District 11’s Audubon Elementary. “But the reality is, anything you show live could always be that thing you weren’t expecting.

“Like a Challenger moment — nobody expected that,” he said, referring to the Jan. 29, 1986, explosion of the space shuttle watched live by millions of school children.

Approaches to Wednesday’s historic event at Pikes Peak region schools will vary by district and even by teacher.

Students at Harrison District 2 “will not be watching the inauguration during the school instructional day,” district spokeswoman Christine O’Brien said, adding that teachers are “prepared to allow students the space to share their feelings, should it come up.”

Social studies teachers in Academy District 20 are prepared to “utilize this historic event to help our students connect with each other” and “deepen learning” in certain areas, district spokeswoman Allison Cortez said. Some students will take a virtual field trip to see the inaugural address, she added.

When the topic is brought up, it will be in the context of a lesson, ensuring that “discussions are delivered respectfully and centered around educational content.”

“When you ground it in the Constitution, in founding documents, then you end up with more of a concrete situation that doesn’t get muddled by politics,” he said.

Duensing took a group of students to Trump’s inauguration in 2017, as well as to visit lawmakers and war memorials, and many Doherty teachers have taken students on similar trips in the past, he said.

He plans to have his students watch tomorrow’s events live — and he’s not worried about doing so.

His message to students: “Bad things can happen, but the framers set up a system that can withstand so many different things that have happened throughout our history.”

It’s a volatile time in American history, but Duensing, who has taught government for three decades, has observed students at other such times, and doesn’t notice any more “angst” and “nervousness” now than in the past, including during the Los Angeles riots surrounding the 1992 death of Rodney King, he said.

“Kids are honest,” he said. “They ask honest questions. They learn that adults like me feel comfortable saying, ‘I don’t know.’ Sometimes they know as much as I do, and the classroom, quite often, is a safe place for them to ask questions, and to voice their worries, concerns and hopes.”

Ford said he would love nothing more than to take in Wednesday’s historic events live with his school’s youngsters.

“I want them to see the first female minority vice president getting sworn in,” he said, his thoughts drifting back to watching the inauguration of President Barack Obama, the country’s first Black president, with students 12 years ago.

Instead, he’ll allow students to watch video of the event on delay, just in case.

“I just don’t need them to see a cut-away to an explosion in downtown Washington. My 10-year-olds don’t need to see what happened on the [Jan.] 6th.”