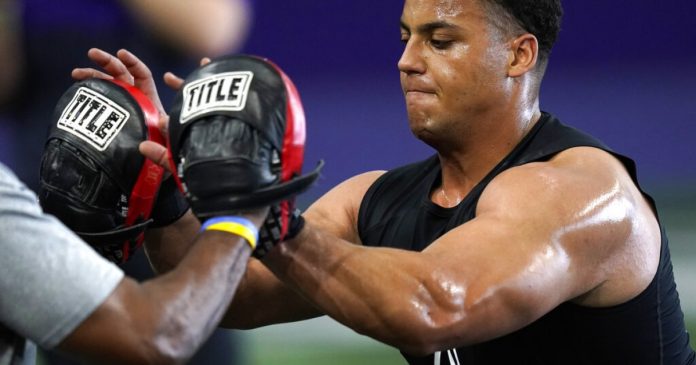 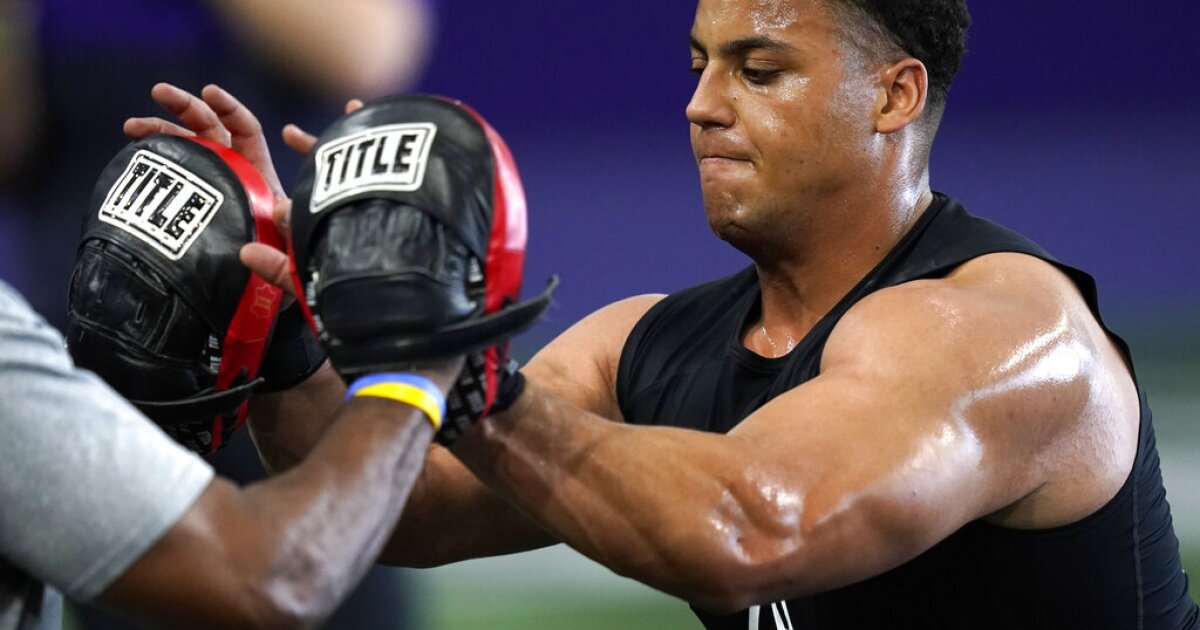 He loves to scout. He watches film, clicker in hand, TV monitor in front of him, pen ready for notes. His last month included trips to North Dakota State, Ohio State and South Carolina. Paton was hired to caffeinate a sluggish Broncos franchise — Denver aims to avoid missing the playoffs for a sixth straight season for the first time since the drought from 1960-1976 .

Paton doesn’t imagine improvement, he inspires it. He rolls up his sleeves, expects the same from others, then uses collaboration to reach decisions. Paton has enjoyed a strong offseason by keeping Von Miller and Kareem Jackson, securing longterm deals for Justin Simmons and Shelby Harris and signing free agents Ronald Darby, Kyle Fuller and Shamar Stephen.

And yet, his first months as the general manager will be judged largely, if not unfairly, on the draft. The Broncos own the ninth pick overall, and face the critical question: Should they select a quarterback? Paton acquired Teddy Bridgewater on Wednesday for a sixth-round pick. He represents a low-risk, medium reward addition at $3 million for one season. He was told he will compete for the starting job. But against who? Will it be Bridgewater vs. Drew Lock? Or Bridgewater vs. a rookie, a player who could replace him during the season?

Bridgewater wasn’t much better than Lock last season, and profiles more like a backup or placeholder at this point.

Unlike last April when I correctly predicted Jerry Jeudy as the Broncos’ pick — it was easy knowing they were going with a receiver — many variables remain in play this year that continue to muddy the waters. With the first round beginning Thursday at 6 p.m. on Denver7, I list likely options for the Broncos, with Fields and tackle Rashawn Slater as the favorites:

QB Justin Fields, Ohio State
If the Broncos draft a quarterback in the top 10, they aren’t bringing in competition for Lock. Or Bridgewater. They are bringing in their eventual replacement. It might not be this season, but it will happen. If Fields is on the board at nine, I believe the Broncos snatch him. I remain bullish on Fields as a more athletic version of Dak Prescott. He has been unfairly scrutinized over the past month, like the mole on Cindy Crawford’s face. Give me a break. He is a baller. He has a high ceiling, is better at his progressions that most realize, has won at every level and faced tremendous pressure as one of the country’s top QB prospects since he was 16 years old. I asked ESPN analyst and former NFL QB Mark Sanchez his view on Fields, who is nothing like failed Ohio State prospect Dwayne Haskins in terms of mobility.

“Fields is a pocket passer who by the way runs a 4.4 (40-yard dash). You’re welcome. He has that rare ability to extend plays. The only thing I can liken it to is a movie script or a sheet of music. You have really talented actors, actresses and musicians and they play that music or read those lines and it’s really, really good, and everybody is happy,” Sanchez said. “Then, there’s a couple of people, the Matthew McConaugheys, the Denzel Washingtons, the Whitney Houstons, the Christina Aguileras, and they take those same notes, that same paper, and they have the ability to take it to the next level with that voice inflection or pregnant pause or that look from Denzel where you are glued to the TV, and you are like, ‘Oh my God!’ It takes you to a place that’s very special and unique. Justin Fields has that ability.”

QB Trey Lance, North Dakota State
Lance possesses the highest ceiling. Teams are afraid passing up on Lance because he could be this draft’s Patrick Mahomes. Lance is raw, and has played one game in 15 months. But the tools drop jaws, and he has played under center frequently. He passes the eye test. Would the Broncos take a player who would need a redshirt year under Bridgewater? Perhaps. But that’s why Fields makes more sense. He has similar athletic tools, and is more polished.

“This entire pre-draft process, it’s all about trying to find something wrong with these kids,” Sanchez said. “You’re examining the apple at Ralph’s or Kroger’s, and, ‘Oh, the stem is a little off.’ These apples are pretty damn close. The only thing with Lance is the lack of experience and some of that is not his fault (his college had one exhibition game last season). I thought in a normal year where fewer teams needed a quarterback and more free agents available, that he’s an early second-round guy. That’s what I thought I when I watched him. But there’s very little tape. I think he would benefit from going into a situation where there’s an established starter. I see a lot of similarities with Jordan Love going to the Packers without the glaring turnovers.”

QB Mac Jones, Alabama
Jones is smart, accurate and coming off a breathtaking national championship season in his one year as a starter. The issue is the limited athleticism and low ceiling. Can the 49ers justify trading multiple first rounders for a player most project as a late first-rounder? If he fits their offense, yes. But if the 49ers go with Trey Lance — and that remains in play — Jones could fall. So would the Patriots or Bears move up for him? Or will he sit on the board at nine for the Broncos? Jones fits Shurmur’s offense. The problem is that if the Broncos don’t win, Denver won’t be using Shurmur’s offense in 2022. Sanchez is impressed with Jones.

“I sat down with Mac and (former Alabama OC and Texas head coach) Steve Sarkisian. The biggest takeaway is how ready to play. That’s because the system he’s been in, because of what they asked him to do pre-snap with shifts, motions, formation alignments, the way they are asking him to read defenses and adjust protection. Those things are huge and will translate very well. The verbiage was pretty similar to an NFL system. His accuracy in and around the line of scrimmage, all the little bubbles, tunnel screens and swing passes, he’s deadly accurate. That’s what he makes him so good,” Sanchez said. “He’s not a guy that rolls out of bed and runs a 4.4. He’s got to maximize his athleticism. He has the short area quickness you need, the subtle movement in the 2-to-3 yard box. He can get back to platform quickly if he gets off. He has plenty of arm strength, nobody complains about that. His comps are Matthew Stafford, Matt Ryan. Nobody complains about those guys. I don’t think anybody would be disappointed to have a player like that. And I do think he fits the mold of a Denver type pocket passer that has been the most successful there.”

RT Rashawn Slater, Northwestern
Slater is a technically sound. He has the footwork to play tackle, even if some teams see him as a guard. The Broncos don’t. At least not longterm. I do wonder if they Slater is the choose if they would consider using him at right guard as a rookie and moving Graham Glasgow into center. Lloyd Cushenberry improved over the second half of the season, but Glasgow has actually played more center in his career than guard.

If they take Slater with the ninth pick, he becomes the future, and possible opening day starter opposite of Garett Bolles. The Broncos have Ja’Wuan James, who has logged 63 snaps in two years, but there’s no guarantee he returns after this season. And the Bronoss don’t know what to expect from him this season if we are being honest. Slater is a terrific athlete and son of former Denver Nuggets journeyman and Wyoming star Reggie Slater. In talking to folks that have watched his film extensively, they insist nobody played former Ohio State and current Washington star Chase Young better in college. Slater understands angles and has great awareness of how he’s being attacked.

Slater is also quick to the punch and strong enough to handle the power of bull rushers. He can get too anxious with his hands, and he doesn’t have the customary long arms NFL teams like against edge players. But he projects as a longterm starter at the position.

CBs Jaycee Horn, South Carolina/Patrick Surtain II, Alabama
I made this position a combo entry. Horn is fearless, aggressive and physical. Paton attended his Pro Day for a reason. Patrick Surtain II is polished and ready to play immediately. Just a sound, well-coached player. Teams can never have enough corners, and the Broncos could move on from Kyle Fuller and Bryce Callahan after this season. Taking Horn makes sense if trade back to middle of the first.

Edge rushers Jaelan Phillips, Miami/Kwity Paye, Michigan
Von Miller could be gone after this season. Look for the Broncos to pick up Bradley Chubb’s fifth-year option after the draft. He might need a running partner. Phillips makes everything look easy. he lives in the backfield. But medical issues must be vetted because of concussions that nearly derailed his college career. Paye looks the part. He was a leader and team captain. However, his lacking production — 11.5 career sacks — makes him a risk.

LBs Micah Parsons, Penn State/Jeremiah Owusu-Koramoah, Notre Dame
If Broncos stay at nine, Parsons will be the best defensive player on the board. He plays violently and boasts 4.39 40 speed, which could help in coverage even though he played mostly zone in college. There are character concerns after off-field incidents at Penn State. Owusu-Koramoah is a hybrid safety/linebacker. He can cover in space and is physical enough to play in the box. He makes more sense if the Broncos trade back into the 15-20 range.