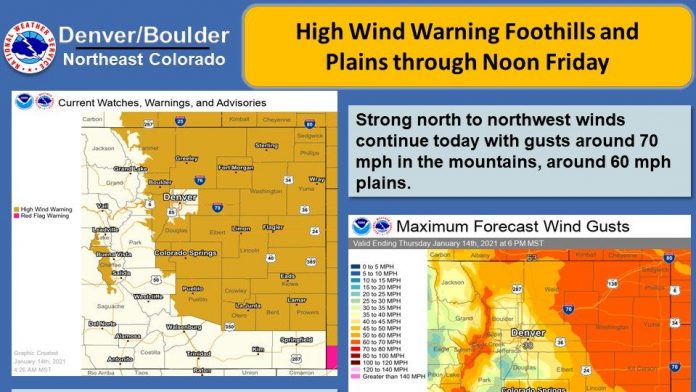 As you might have realized after waking up to the window-rattling wind Wednesday night, Fort Collins and much of the Eastern Plains are under a high wind warning until noon Friday.

The peak gust at the Colorado State University campus was 36 mph, with a 58 mph gust at Christman field on the northwest side of Fort Collins, according to the Colorado Climate Center.

That wind caused multiple semitrailers to topple over along Interstate 25 between Windsor and the Wyoming border as well as power outages and building damage.

And more wind is on the way thanks to a cool front moving through and the jet stream parked on top of Colorado.

The National Weather Service said to expect strong northwest winds from 25 mph to 40 mph with gusts from 65 mph to 75 mph Thursday in the warning area. Those winds will decrease Thursday morning but will pick up at night and remain into Friday.

The Fort Collins forecast calls for winds 23 mph to 33 mph, gusting to 50 mph Thursday and 11 mph to 20 mph with gusts as high as 31 mph Friday before slowly tapering off for the weekend.

Toppled semis closed northbound I-25 near Wellington and southbound I-25 near the Windsor Exit and I-76 near Sterling overnight Wednesday, according to the Colorado Department of Transportation.

Those interstates reopened but CDOT cautioned high profile and light vehicles to take extra precautions, especially on I-76.

Poudre Valley REA sent a Tweet on Wednesday night indicating the high winds caused isolated outages across its coverage area and that crews were restoring power as quickly and safely as possible.

The town of Estes Park sent a Tweet on Wednesday night saying crews were responding to a wind-related power outage affecting the Glen Haven area, where two poles near the Glen Haven Store were broken by the high wind.

Social media posts showed a gas station canopy in Estes Park being blown off its supports.