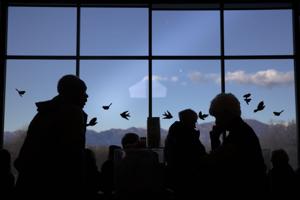 With North American bird populations in steep decline, Saturday morning’s winter bird count at Fountain Creek Regional Park took on added air of uncertainty: would there be fewer birds and species spotted than in the past?

More than 40 birdwatchers braved the 13 degree temperatures — armed with pencils, pads and binoculars — as they trekked through the park’s diverse terrain to look and listen for various bird species.

People from around El Paso County annually volunteer their time to document what birds they see and hear so that researchers can get a clearer view of populations.

“When you do this over time, you can collect data and information and see trends and possibly have a positive impact,” said Risë Foster-Bruder, a 17-year volunteer at the center. “And it’s good to get outside, too.”

The park hosts three bird counts throughout the year: spring, fall and winter. The winter count usually amasses between 45 to 55 species, said Tyler Stuart, an avid birder who led the group Saturday.

But Saturday, there were 42 species recorded. And to many of the fowl fans, the slight decrease was discouraging.

Last year, researchers published a study that found 2.9 billion breeding adult birds in North America, nearly 30% of the continent’s population, have been lost since 1970. It concluded that the disappearance of the animals “indicates a general shift in our ecosystems’ ability to support basic birdlife.”

The Fountain Creek Park is made up of a variety of habitats, including woodlands, a running creek and open meadows, which makes it one of the top bird sighting spots in the county, said Jessica Miller, interactive program coordinator at the center. Though even in a bird sanctuary like the park, the decrease in certain species has not gone unnoticed.

Foster-Bruder, a semiretired teacher, remembered a year when she recorded more than 200 robins near Palmer Park. The next year, there were none. It’s typical for bird populations to fluctuate, she admitted, but there have been small signs of concern around Colorado.

Driving the decline, experts say, is habitat loss and climate change. A December study from researchers at Colorado State University found that billions of birds were migrating earlier each spring due to rising temperatures. Effects of climate change, it said, were causing a huge shift in one of nature’s most incredible phenomena.

Birds that experienced the most drastic losses were orioles, meadowlarks, swallows and warblers. The lark bunting, Colorado’s state bird that’s actually a swallow, experienced a dramatic population decline of 93% over the past four decades, a 2016 State of North America’s Birds report found.

There are some populations that have increased, Stuart said. Canada geese and collared doves, for example, are birds that typically find a way to live among humans successfully, he said. Others do not, and eastward rural expansion in Colorado Springs has caused a sharp decline in their numbers.

Though they may feel like raindrops in the ocean, Stuart said, those small changes are key to mitigating bird deaths.