Here’s what it takes to get a DUI in the Centennial State. Jacob Laxen, Wochit

A Fort Collins woman was arrested in connection with a crash that killed a 92-year-old woman on her way to church Nov. 10.

A passenger in the Sienna, 92-year-old Neva Lippert, was killed in the crash. The vehicle’s driver was transported to the hospital with minor injuries.

Stebbins was transported the hospital with serious bodily injuries, including a fractured pelvis and a fractured wrist, according to an arrest affidavit. 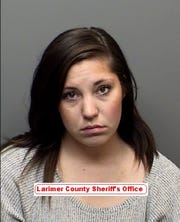 Arrest documents say Stebbins had bloodshot eyes and “a strong odor of alcohol emitting from her” when Colorado State Patrol Trooper S.M. Rendfrey interviewed her at the Medical Center of the Rockies.

When Rendfrey asked her if she had been drinking that morning, Stebbins said she went to a friend’s house at 1 a.m. and had mixed vodka drinks.

Stebbins has been charged with vehicular assault while driving under the influence, a Class 4 felony; reckless vehicular assault, a Class 5 felony; driving under the influence, a misdemeanor; careless driving resulting in injury, a traffic offense; open container of alcohol in a vehicle, a traffic offense; and driving without insurance.

Stebbins was released from the hospital was booked at the Larimer County jail on Nov. 18 with bond set at $1,500. She remained in jail custody Thursday morning, according to online records. Her next court appearance is a disposition hearing set for 9 a.m. Jan. 2.

She does not have a significant criminal history in Colorado, according to court records.

Lippert had lived in the Fort Collins area since 1966 and was one of the first female  Realtors, according to her obituary, which stated she was on her way to church when the crash occurred.