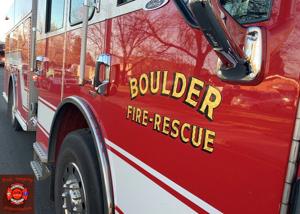 A woman was rescued from a lake in Boulder after she fell through the ice while trying to help her dog who had also fallen through and into the water.

Both the woman and the dog are expected to be okay, according to Boulder Fire-Rescue.

Rescue crews were called to Coot Lake near 63rd Street and Diagonal Highway just after 11 a.m. on Wednesday. The Boulder Fire-Rescue Department said callers saw the woman fall through the ice while she was trying to get her dog out of the water.

When crews arrived at the scene, they found the woman partially submerged in the water about 55 feet from the shore. Boulder Fire-Rescue said her head and arms were above water.

She was safely rescued from the water just before 11:30 a.m. and brought to the hospital.