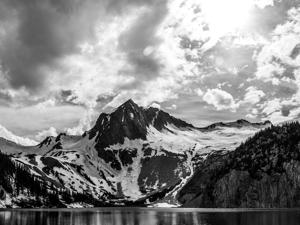 According to the Pitkin County Sheriff’s Office, a hiker took a big fall near the 14,099-foot Snowmass Mountain on Tuesday afternoon.

A report of an accident was received by the Pitkin County Regional Emergency Communications Center at about 4:25 p.m., following a 27-year-old woman’s 400-foot fall down a steep slope that was covered in snow and scree. GPS coordinates from a SPOT Rescue Beacon device pinned the woman at Snowmass Lake, which is found just east of Snowmass Mountain at an elevation of 10,980 feet.

It’s unclear exactly where the fall took place and what hike the woman was on when the accident occurred. The image below shows what terrain is like in the area, with the grey pin near the summit of 14,099-foot Snowmass Mountain and the red pin on Snowmass Lake, several thousand feet below.

During the fall, the woman sustained several injuries including a possible open leg fracture and a head wound. While awaiting a response from rescue crews, at least three bystanders were tending to the woman, including a nurse.

Following the report of the accident, rescue crews mobilized and a two-person team was dropped in the immediate area via helicopter around 6 p.m., with two additional teams sent to the scene on foot from the Snowmass Creek trailhead.

The heli-dropped rescuers were able to make contact with the woman by 6:25 p.m., working to stabilize her wounds and moving her toward the helicopter landing zone. During this time, additional rescue personnel were dropped into the immediate area via repeat trips from the helicopter.

It took about two hours for crews to move the woman a half-mile to the helicopter landing zone. By 8:30 p.m., the woman was airlifted to Aspen Valley Hospital, where she is being treated for non-life-threatening injuries. All crews were out of the field shortly after midnight.