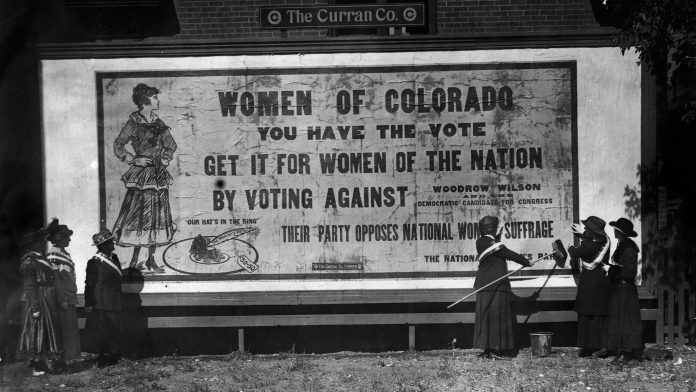 A century after U.S. women won their fight for women’s suffrage, the fight for Washington, D.C’s first outdoor monument honoring them has nearly ended.

Bipartisan legislation to create the Every Word We Utter women’s suffrage movement monument passed the U.S. Senate last week and is now headed to President Donald Trump’s desk for a signature. Trump has previously expressed support for the legislation, according to a news release from Colorado Congressman Joe Neguse’s office.

Neguse — U.S. Representative for Colorado’s 2nd Congressional District, which includes Larimer County — introduced the monument legislation in January 2019. It passed the House in February 2020 and cleared the Senate last week.

“This effort has been locally led from the start, when the idea for a suffrage statue was brought to our office from constituents in Loveland,” Neguse said in the release. “It is a prime example of what we can accomplish when Colorado’s ingenuity and passion are put to work. … I urge the president to sign the bill into law so the next phase of this project can begin.”

News of the bill’s passage comes just weeks before the close of 2020 — a milestone year that marked a century since the ratification of the 19th Amendment in August 1920.

How the West was won (by women):Colorado, Wyoming women got voting rights decades before the 19th Amendment. Here’s how.

The possible new monument would be the first outdoor monument established in Washington D.C., to commemorate the women’s suffrage movement.

Portrait Monument was presented to the U.S. Capitol as a gift from the women of the United States National Woman’s Party on Feb. 10, 1921, according to the Architect of the Capitol. It sat in the Capitol rotunda for one day before being relocated to the Capitol’s crypt — a downstairs space likened, by some, to a broom closet.

A push to return the statue to the rotunda started in the 1990s, back when less than a handful of the 100 statues in the Capitol were of women and an estimated 8% of outdoor statues in the country depicted women, National Women’s History Museum treasurer Susan Danish told the Coloradoan earlier this year.

“They heard all kinds of things,” Danish said of the women who advocated for the statue’s relocation. “They heard things like the women in the statue are too ugly … they were told the statue was too heavy and could damage the rotunda floor. Finally, they heard there wasn’t any money to move (it back to the rotunda).”

The group raised the funds necessary and had Portrait Monument returned to the rotunda on Mother’s Day 1997.

If signed into law, a Loveland-based board will be tasked with raising funds for the new Every Word We Utter monument’s establishment, according to Neguse’s office. It will not utilize any federal funds, according to a summary of the bill.

The statue has already been conceptualized by Loveland sculptor Jane DeDecker.

“This is a victory for women, for history and commemoration in our nation, and for all those in the future who will get to look at this monument, placed in the heart of our democracy, and see themselves reflected,” DeDecker said in the news release.