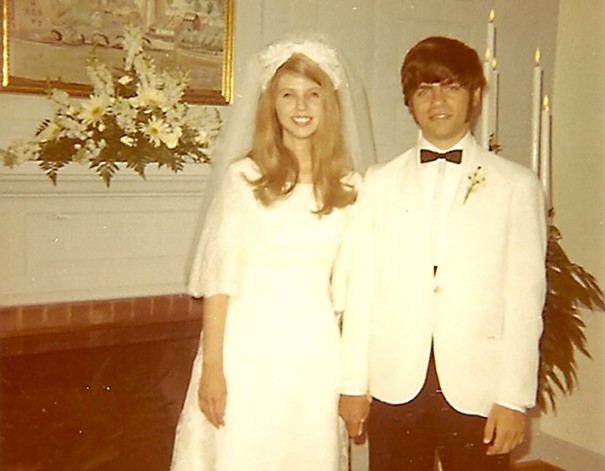 This story begins — and sometimes, I fear, ends — when my wife, Susie, died two weeks short of our 49th anniversary, and I sink into a deep depression even though she had been battling early-onset Alzheimer’s for too many years, and I knew, in a way I know few things, that the best way for her battle to end was with endless sleep.

I also knew that when the time came, I would tell the love story of Mike and Susie because the truest thing about being a writer is that, whatever the circumstances, writers write.

I don’t usually get personal in my columns, and I rarely write about my family because, not least, of the crazies out there who have physically threatened me over the years for the audacity of voicing a political opinion. But this was different. I couldn’t write about the world if I didn’t write, this once certainly, about my world. And the hard thing here is that I lost her twice — once to the disease and again when she died.

My daughter and I decided not to do a big funeral. We did a series of small memorials in towns across the country — the cities I had dragged Susie to, forcing her to leave all her friends behind one more time, to satisfy my career ambitions. At the memorials, we celebrated her life with close friends, Susie’s and mine, who were often the same. I told the same stories that I’d been telling throughout our life together, and it was Tina who noted that no one enjoyed those stories more than the person who lived them with me. I loved these gatherings.

I told — and this is true — how 99 percent of our fights came in a car when we had gotten lost. We had disagreements, of course, but we learned in time where the vulnerable spots were and we learned not to go there. The problem was that I’m always getting lost, even with a GPS, while Susie had a great fear of being lost. And to make it worse we traveled all the time — I traveled the world for work and Susie and my daughter would often travel with me on frequent-flyer miles and certainly on vacation — and Susie loved all of it, the new places, the new people, the dramas, the food, the everything. Except for the fights.

We had one child, the law professor I often mention, and for whom Susie was the best possible mother. We lived the life we wanted to live. So much laughter, so much adventure, so much seeing and learning new things, so much Susie and I chasing presidential politicians in Iowa and New Hampshire, so much Susie and our daughter and our friends, so many friends, some of them vacationing with us in a Maine sea-captain’s house, some for a week in Ireland, others for a week in Portugal, Christmas dinner in Paris, gelato in Italy, at the Christmas Market in Hamburg while I chased the ghost of 9/11 terrorist Mohammed Atta, in Prague and Leipzig before the wall fell, in maybe two dozen countries. We knew how fortunate we were.

God, we lived a life. And then there was the end. I still can’t stand the end. Caregivers 24/7. Loss of cognition. Loss of memory. Loss of being able to get out of bed. Loss of everything. On the days she recognized me, I had brief moments of joy. On the days she didn’t, I just carried on. I can’t stand reading those stories on Alzheimer’s that suggest some silver lining to a disease that, as far as I can tell, steals you from yourself and then from everyone else. And for so many families, it would mean losing all your savings, maybe giving up your job, taking away everything.

Our last trip to Europe was to London (a West-End-play-watching vacation with our daughter) and then to Provence for a week and then to Nice for two nights. All on frequent-flyer miles. Both nights, we walked the glorious Promenade des Anglais, a walkway along the sea. A couple of years later, on Bastille Day in 2016, a truck driver drove down that promenade, mowing down 86 people, including 10 children, and wounding more than 200. He drove that killing truck for a mile just at the place Susie and I would walk. I was angry and heartbroken, of course, about the terrorist act, but I was more heartbroken than usual. When we were taking those walks — Susie in a wheelchair — I knew that Susie and I would never be back there together, that trips were too exhausting for her, that soon enough she would be mostly past enjoyment. And so as that driver was killing the hopes and dreams of all those innocents, he had attached himself to one of my last unforgettable moments with the person who, unforgettably, made every moment we were together better.

And whenever the work of living gets too hard, and I get too low, I remind myself that together Susie and I brought into this world a wonderful daughter who brought into our family two grandsons — one 4½ (the half is critical at that age as all parents know) and one 16 months, who will always know of their Grandma, at least as long as they have me and our daughter to tell her stories. She got to know the older, Lalo, a little. She fed him. She held him. And later, when she could no longer talk, he would rub Grandma’s back like I would rub his when he wasn’t feeling well.

And though he understands that Grandma is dead, he thinks it’s like the dinosaurs he loves — that she’s somehow extinct — and I know how this would amuse Susie and how she would comfort Lalo. She would know just the story to tell him, just the words to use, to let him know he shouldn’t be afraid and shouldn’t be too sad, because she would love him always and forever. The idea of him in her lap, asking her life-and-death questions as ever-inquisitive 4½-year-olds do, Susie making sense of it all, makes me smile, if through a tear or two. Which is why I’m glad I could finally write this.

A longer version of this article originally appeared in the Colorado Independent.