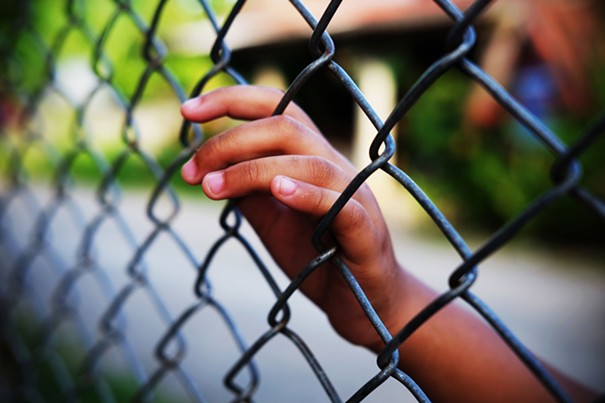 On a recent December school day, four teenagers and their instructor ate pizza together around a table at The Living Word Baptist Church east of downtown Colorado Springs.

The students all have some disciplinary history or involvement with the juvenile justice system that kept them from finishing traditional high school, but you wouldn’t know it from talking with them or watching them interact.

“They come into class if they can get there, or their parents drop them off, and one child takes an Uber just to get there,” says Pastor Paul Nelson, who offered to let the students use his church’s space. “When they get there, they’re not acting out like they said they do at other schools. … That touches my heart, to see [the students] coming out, and they’re smiling and they’re getting along.”

“I used to work in the juvenile justice system and … really all I was doing was trying to find kids places to go get educated,” Stone says. “…I think a lot of people don’t realize that students can get expelled for [criminal] charges.”

Not only that, she adds, but also when a student is expelled from one district, another district probably won’t accept them. Districts are required to offer online school for expelled students, but that can be difficult for kids who don’t have a computer at home or parents who make sure they do the homework.

“What we’re trying to do is create an education space based on the fact that three days a week with trusted, supportive adults is probably going to get them a lot further in their education than seven days a week online,” Stone explains.

Danny Morales, a local entrepreneur who recently earned a master’s degree in sociology from the University of Colorado at Colorado Springs, serves as a community advisor for the L.E.A.D. Academy, helping recruit teachers and fundraise.

He says the program is a kind of “Band-Aid” on the larger problem: educational and criminal justice systems that stack the odds against students of color, as well as students deemed dangerous because of where they live or who their family members are.

Research shows teachers and legal professionals tend to see young people of color as a threat, Morales says, “whereas when they describe a white kid who’s acting out in class, they think he has, maybe, [attention deficit hyperactivity disorder] — or they’ll say he has family problems at home right now, and he may need some counseling.

“But they don’t recommend counseling for a youth of color, because they feel that it won’t work because the family’s not there to support them … and that’s just not really based off objective reality,” Morales continues. “You’re measuring this child based off his relatives or based off of your preconceived notions of that ethnicity or that race.”

That means students of color often face harsher consequences, such as expulsions and detention sentences, than white students who act the same way.

And keeping kids out of jail is important: “Essentially, kids that get into the juvenile justice system are really pipelined for their future in prison,” Morales says.

Policy-makers in Colorado have made efforts to reform the way schools punish kids who act out.

State Sen. Pete Lee, a Democrat from Colorado Springs, points to legislation passed in 2012, while Lee was serving in the state House.

“What we tried to do was get rid of [the] zero-tolerance policy,” Lee says.

Whereas state law previously forced schools to expel students who had been suspended three times in a school year, possessed a dangerous weapon, had been caught with drugs, or committed a robbery or third-degree assault, those offenses no longer lead to mandatory expulsions — but “may” be considered as grounds for expulsion.

“When schools say they have to kick kids out, that may be a misinterpretation of the state law or a decision that they have specifically made at their school district level,” Lee says. “There are very few things that a school is required to kick kids out for, and it’s really the local school boards that are empowered to make those decisions.”

In the case that one district refuses to admit a student who has been expelled from another, Lee says parents should bring up the issue with the school board.

He also points out that some kids can find help through alternative high schools such as D-11’s Community Prep School downtown, which helps students finish credit requirements at their own pace.

“We certainly don’t want to mandate that another district must accept [expelled students], but we’ve got to find education solutions,” Gardner says, adding that some students, whether or not they’ve been subject to disciplinary action, find success taking online classes.

“The challenge there is the balance between public safety and protection of the school districts, versus doing what we can in the best interest of a student who has been expelled and perhaps adjudicated in a court,” he says. “And those aren’t easy answers.”

In the meantime, people like L.E.A.D. Academy’s Stone, Bryant, and Dwayne Roberts — who offers students mentorship and leadership development — work to help them create a brighter future for themselves.

While those involved hope to expand the program in the future, it’s difficult to find the resources and personnel, says Loring Wirbel, co-chair of the Pikes Peak Justice & Peace Commission. (Disclaimer: Wirbel is a freelance music writer for the Independent.)

“You have to find the people with the dedication and the focus” to work with students who may not always fit traditional schools’ expectations, Wirbel says.

“It’s easy to be focused on the things we’re not good at, or hardships of life,” Roberts points out. His message to the students: “If you can see where you want to go — you can visualize it — you can be it, you can do it, you can have it.”